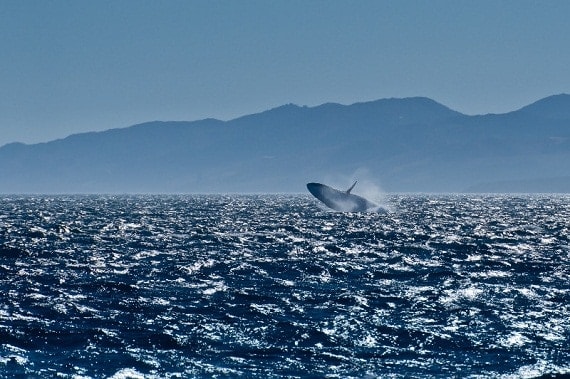 Late last month, a playful fin whale gave a lucky group of spectators the experience of a lifetime as he breached from the Strait of Gibraltar, a narrow strait that connects the Atlantic Ocean to the Mediterranean Sea. Fortunately, a research assistant for Conservation, Information and Research on Cetaceans (CIRCE) happened to have her camera on and ready to catch this extremely rare occurrence. The assistant caught breathtaking scenes at 0:03, 0:27, and 1:13 in the video.

Often described as the “greyhound of the sea,” fin whales are among the fastest swimming whales on the planet—a fact that makes their skyrocket breaches even more impressive. According to NOAA, this endangered species is seen in almost all the major oceans in offshore waters, mostly in the North Atlantic and Southern Ocean.  Fin whales are the second largest whale species—just behind the blue whale—and reach nearly 80 feet in length and weighing up to 80 tons.  They are rarely caught breaching because of their enormous size.

“It’s a very rare behavior,” said Alisa Schulman-Janiger, an American Cetacean Society researcher. “It’s rarely observed and even more rarely captured on camera. If one does happen to breach, what are the chances that you’re going to be ready with a camera?”

Check out the video below to see this fin whale perform a rare breach, and click here to learn more about Oceana’s efforts to protect whales from bycatch, sonar, and other threats.

This article was written by Rebecca Cruz for Oceana.org