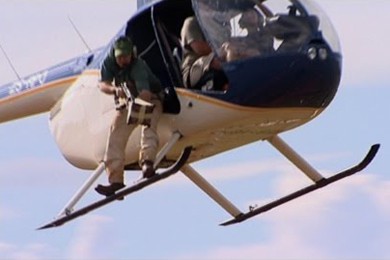 The black wildebeest or white-tailed gnu (Connochaetes gnou) is one of the two closely related wildebeest species.

The natural populations of black wildebeest, endemic to the southern part of Africa, were almost completely exterminated in the 19th century, due to their reputation as pests and the value of their hides and meat.

However, the species has been reintroduced widely from captive specimens, both in private areas and nature reserves throughout most of Lesotho, Swaziland, and South Africa. It has also been introduced outside its natural range in Namibia and Kenya.

Shaun and Emma have been tasked with removing black buffalo from a farm, and unfortunately the only way to do it is with a netgun.

All forms of animal hunting must be banned

Thanks to the value of the Black Wildebeest as a hunting trophy their populations are at these huge numbers.