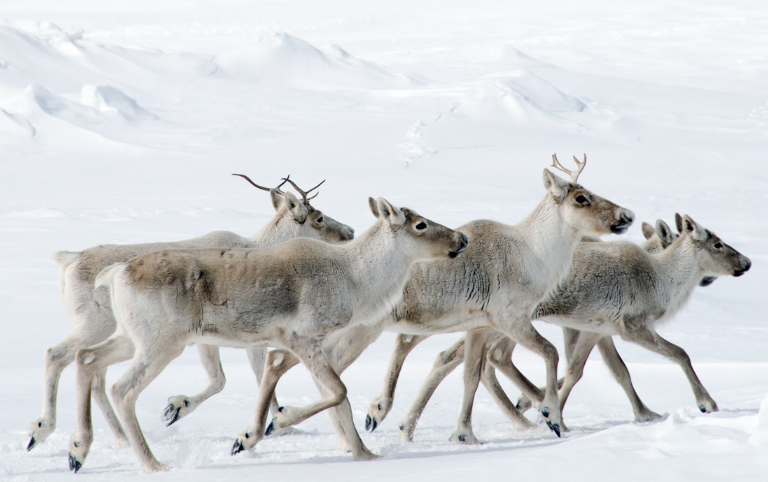 It’s fall in Nunavut, Canada, and Richard Kakk is hunting caribou. Snow that started in September has placed him in a landscape of white, broken only by the ice-crusted slate blue of the Gulf of Boothia to the west, the patches of exposed black rock in the rolling hills to the east, and the brown splotches of the caribou herd up ahead. Though temperatures are nowhere near the winter lows of -30° Celsius (-22° Fahrenheit), it’s no place to tarry, particularly if a polar bear should show up interested in his kill.

Even so, after Kakk harvests a caribou, the full-time hunter from the community of Kugaaruk stops to take his phone from his bag. With a few taps, he records how many caribou he saw in the herd, how many males and how many females, and whether the herd looked healthy. When he returns home, he’ll upload this information to a database owned wholly by his community. There, Kakk’s data can help guide important management decisions about Nunavut’s diverse wildlife.

“These harvesters are generating knowledge that is impossible to obtain from science or social science research alone,” said Denis Ndeloh Etiendem, director of wildlife management at the Nunavut Wildlife Management Board (NWMB). Ndeloh Etiendem co-authored a recent paper in the journal Arctic Science about the program’s first eight years of operation.

This community-based wildlife monitoring project, an effort of the NWMB, occupies a unique place at several crossroads: of modern technology and traditional practices; of bureaucracy and self-governance; and of Western science and Indigenous knowledge. These are crossroads that are not always simple to navigate, and sometimes conflicting. But according to program managers, the program offers tremendous potential.

For much of the program’s run, participating harvesters have used weatherproof handheld tablets to document their field observations. While hardy, these tablets are also expensive, the high cost limiting the program’s scope to just three communities over a three-year monitoring period.

This year, the NWMB reconfigured the tablet app to run on any Android phone. While simple, this technological change could vastly expand the program’s information-gathering potential.

Kakk and other program participants told Mongabay that the new app has made it significantly easier to record observations. Ndeloh Etiendem said that the app will ideally let them operate the community-based monitoring constantly across the territory, with no time limit to how long participants can log information.

“More importantly, this information is owned by the community,” he added. “They can make their own decisions using the eyes of their own harvesters, in real time. They don’t have to apply to the government for data for information about a study that happened three years ago and wait for the bureaucratic process to come around.”

The NWMB launched the community-based monitoring program in January 2012. It aims to both document Inuit harvesting practices and gather baseline wildlife data that has long been impossible for scientists to collect. Nunavut’s harsh weather has typically limited scientists’ data-gathering to the short summer, and the largely remote territory covers a massive area: its land and water combined stretch more than 2 million square kilometers (772,000 square miles), equivalent to nearly four-and-a-half Californias.

Over the program’s eight years, it collected 8,187 records documenting 36 species across the territory. These records include whether animals appeared sick or healthy. They also include important logistical data, such as how hunters are traveling and the routes they follow across changing sea ice — both of which can demonstrate how communities are adapting to climate change. Already, the data has informed local management decisions, including weighing the risk of the Whale Tale mine to caribou harvesting. The mine opened in 2019.

“It’s helped me reflect on what the harvest habits are, and notice how the animals migrate or move,” said Lars Qaqqaq, a hunter and trapper from Baker Lake who has volunteered with the community monitoring program since 2018. It’s also drawn Qaqqaq’s attention to wildlife shifting north, which he believes is due to climate change.

However, the program also presents its own challenges. The information from the hunters doesn’t fit the requirements of scientific data. This data isn’t randomized, and hunters collect it on targeted hunting routes. As a result, it’s not considered representative sampling. Yet the data also doesn’t fit the characteristics of participatory Inuit Qaujimajatuqangit (IQ) research, the social science study of Inuit traditional knowledge.

“Looking at just the words of the Nunavut Agreement, you have to bring in science and Inuit knowledge,” Ndeloh Etiendem said, referring to the document that established Nunavut Territory in 1993. This founding document expressly recognizes the Inuit people’s legal rights to harvest wildlife, and mandates that management decisions use both scientific knowledge and IQ. “So, where does this new knowledge from the community fit?”

“It is difficult to know how to use [this data], and it is politically fraught to try and give weight to local knowledge versus scientific,” Ashthorn said. “What happens, for example, when people say there’s tons of caribou but a model says there aren’t? Who gets the most weight?”

Rebecca Jeppesen, the community liaison and project manager of the NWMB, said in an email that she felt a mismatch between local information and scientific studies often occurred because they were working on different spatial or temporal scales.

Yet experts from both programs emphasized that there was unique value to community monitoring data. At the minimum, Ndeloh Etiendem suggested that this information could offer a jumping-off point to inspire more structured scientific surveys.

Ashthorn added that this data can help tell a story, describing the world with greater depth and insight.

“If we keep wanting local knowledge and perspective to look like scientific data, we’re going to keep beating our heads against the same brick wall, because the strength of it is that it doesn’t,” she said. “Where science can’t really gather enough data or can’t really understand how changes are affecting a community, that’s where local knowledge can step in. But it’s not going to always look like a one or zero.”

Instead, she said, scientists and policymakers who want access to local knowledge should have the “patience and tolerance and willingness to think outside the box” in using these databases.

The good news is the Nunavut Wildlife Management Board is committed to maintaining and expanding the program, including finding new ways for the board to use community knowledge.

Ndeloh Etiendem’s goal is to create a “digital footprint” of current Inuit harvesting that can inform generations to come.

“If you really want to know what is happening and how people adapt to changes, especially in the Arctic where changes are very rapid, you have to be there for a long time,” he said. “Programs like community-based monitoring allow us to be here for the long term.”

Qaqqaq said that he hopes this long-term monitoring will inspire investigations into big-picture patterns and changes that most people, including non-hunters living in Nunavut, don’t notice. After all, climate change is warming the Arctic two times faster than any other habitat on Earth. There may be no better way to see these changes than through the eyes of those who use, hunt, and live within this landscape every day.