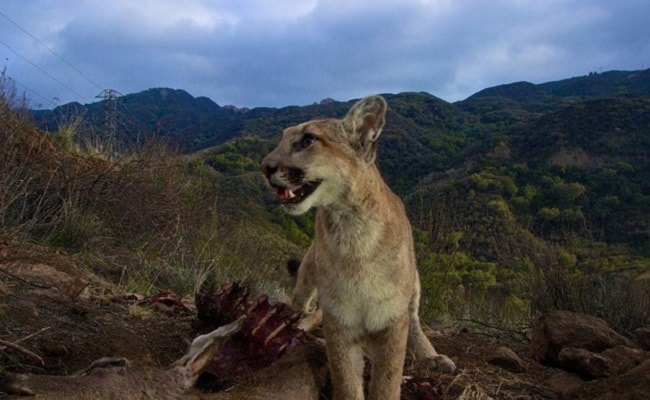 It’s not an easy life for the mountain lions and other animals that make their home in the Santa Monica Mountains. Because they’re so isolated, Los Angeles mountain lions are almost 100 percent likely to become extinct in 50 years due to inbreeding, which can cause health problems and unusual behavior. Leaving their territory is no easy feat — they have to make it across busy, eight-lane freeways.

Since 2002, 17 mountain lions have killed trying to cross freeways in the area. Among them was one known as P-39, who in December 2016 left behind three orphaned kittens. Just a few weeks later, one of those kittens was killed on the same freeway, not far from where his mother died. And a few weeks after that, one of the kitten’s siblings was also struck and killed.

One way to help prevent heartbreaking deaths like these is by building a wildlife corridor across one of those busy freeways. It would allow mountain lions and other animals to roam from the Santa Monica Mountains to the Sierra Madre Mountains north of Los Angeles without the risk of being struck and killed by speeding cars.

For years, wildlife advocates have been working to get a bridge built across the 101 Freeway in Agoura Hills. Plans and proposals came and went until January 2016, when the California Department of Transportation (Caltrans) finally held its first public meeting regarding a wildlife bridge.

A 165-foot-wide, 200-foot-long bridge would cross the 101 near Liberty Canyon Road. With native vegetation, an irrigation system, sound walls and retaining walls, it would provide a safe crossing not only for mountain lions, but for bobcats, deer, coyotes, squirrels, mice, lizards and other animals. It would be the first of its kind in California.

At that Caltrans meeting, the bridge was estimated to cost at least $55 million to build – and Caltrans said 80 percent of those funds would have to come from corporate and private donations, which it expected to collect by 2019. The bridge is expected to be completed by 2022.

To help raise those funds, the National Wildlife Federation (NWF) is leading other advocacy groups in what it’s calling “one of the most ambitious fundraising campaigns ever held on behalf of local wildlife,” according to the Los Angeles Times.

Their goal for now is to raise $10 million by next June to help Caltrans, which is overseeing the design and construction of the bridge, keep the design phase of the project on schedule. About $3.6 million has been raised so far, thanks to donations from the Annenberg Foundation, Leonardo DiCaprio Foundation and the Boeing Company – as well as from generous people likean elderly Kansas couple who pitched in $175,000.

“The thousands of individuals who’ve already made contributions large and small demonstrate the community’s commitment and support for a noble cause,” Molly Judge, director of leadership, giving and individual philanthropy for the NWF, told the L.A. Times. She said she’s optimistic that the $60 million goal will be met.

For information about making a donation to help pay for the wildlife crossing, visit the National Wildlife Federation website.

The longer it takes to build the bridge, the more wildlife is in danger of dying. Please sign and share this petition urging Caltrans to begin construction as soon as possible.