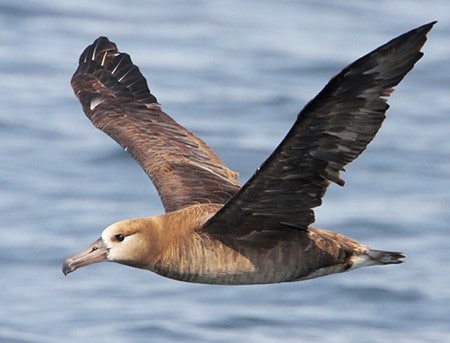 On August 20, the U.S. Fish and Wildlife Service (FWS) issued a permit under the Migratory Bird Treaty Act (MBTA) authorizing a limited number of seabirds to be killed or injured by Hawaiian swordfish vessels.

This action is the first permit ever issued under the MBTA – America’s foremost law protecting migratory bird species – to regulate the “take” of migratory birds in the operation of an otherwise lawful commercial activity.

Until now, only regulation under the Endangered Species Act had been used to prevent seabird deaths caused by commercial longline fishing, and then only in relation to the endangered Short-tailed Albatross. It has been well-known for decades that Hawaiian swordfish boats kill and injure Black-footed and Laysan albatrosses. The birds are attracted to and dive on baited hooks, becoming ensnared in lines or impaled by the hooks and dragged under the surface to be drowned. However, the MBTA had not historically been applied to this fishery because the National Marine Fisheries Service (NMFS – the federal agency that oversees the U.S. fishing fleet) had asserted that the areas where it operates, federal waters and on the high seas, lie outside the jurisdiction of the MBTA. But NMFS evidently reversed their position in 2011, when they decided to apply for this permit.

“ABC generally supports the issuance of permits for the Hawaiian swordfish and other U.S. fisheries as a mechanism to reduce seabird bycatch, but the conditions under which this precedent-setting take permit will be issued are disappointing,” said George Wallace, Vice President for Oceans and Islands at American Bird Conservancy (ABC), the only organization dedicated exclusively to conserving birds throughout the Americas.

A Draft Environmental Assessment on the NMFS permit application was published by FWS in the Federal Register on January 10, 2012. ABC provided official comment on the assessment’s analysis of the proposed permit and its impacts to seabirds. ABC indicated support for a permit alternative that would result in limiting and/or reducing current levels of incidental mortality and seek compensation for practicably unavoidable seabird mortality if necessary.

FWS published its Final Environmental Assessment on August 20, 2012, concluding that the current level of take, which averages 54 Laysan and 20 Black-footed albatrosses annually (equivalent to less than 1 percent of the estimated breeding population of each species), does not pose a threat to the population or conservation status of either species. FWS therefore decided to authorize take at this level and add in a buffer to account for anomalous events. Under this permit, NMFS will not be required to take action to reduce albatross take in the fishery. Instead, they will be required to analyze existing data and tap other sources of information to improve their knowledge of when and how take occurs and investigate how that might be remedied.

“While it is evident that FWS does seek the eventual reduction of seabird mortality in this fishery, that desire is not reflected in the permit conditions. NMFS and FWS both know that the high proportion of albatrosses hooked or entangled and then released alive likely result from certain casual practices that unnecessarily expose seabirds to increased risk. There is no incentive to reduce these practices if permits authorize take in such generous numbers. Furthermore, the permit does not require any offset or compensation from NMFS for avoidable take,” added Wallace.

One practice that could have been halted by the take permit, but will be allowed to continue for now, involves dragging baited hooks on the surface of the water behind the fishing vessel while other lines are retrieved. This increases the exposure of seabirds to baited hooks and leads to a higher chance of them being injured.

“A remedy for this problem does not require data analysis and multiple three-year permit terms to develop and implement. FWS has missed an opportunity to eliminate this unnecessary risk to albatrosses now,” said Wallace.

The Final Environmental Assessment (FEA) and Finding of No Significant Impact (FONSI) are available on the FWS Pacific Region’s website: www.fws.gov/pacific/migratorybirds/nepa.html .