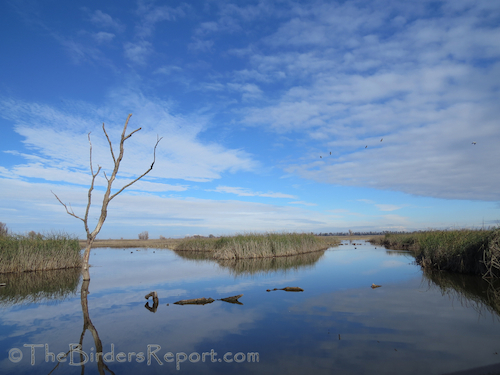 There is one notable exception to this, the US Fish & Wildlife Service has had the foresight to install a photography blind on the refuge, away from the hunting area. The image at the top of the post is the view from the photo blind. That is where these images were taken (click on photos for full sized images).

The sun didn’t rise over the early morning cloud cover until around 8 am. This immature Turkey Vulture was one of the first photo ops I had, other than the ubiquitous American Coots which you will see later

Red-winged Blackbirds(Agelaius phoeniceus) were a plenty, chattering back and forth and occasionally perching on the snag located in front of the blind.

Black Phoebes(Sayornis nigricans) were busy hawking insects from perches and zipping back and forth from one stand of bulrush to another.

Of course there were plenty of ducks and geese to keep any photographer busy. Mister and misses Mallard(Anas platyrhynchos) were well represented.

There weren’t as many American Wigeon(Anas americana) as I would have expected.

Later, when the sun broke through and there was a mixture of sun and thin clouds, I was able to get some in-flight shots. Like these Greater White-fronted Geese(Anser albifrons) that were spooked by something into flight.

At one point I was totally taken by surprise when I spotted a Long-billed Curlew (Numenius americanus) flying overhead. A bird I hadn’t seen all that day, although I wasn’t really in shallow marsh habitat.

Occasionally a Herring Gull (Larus argentatus) would be seen flying about.

Following several attempts at getting a good photograph of a Northern Harrier(Circus cyaneus), which I still like to call the Marsh Hawk, I got this satisfying shot of a female in-flight.

However satisfying that Marsh Hawk was to see so close, there is one raptor I am always hoping will appear on the snag in front of the blind whenever I visit the National Wildlife Refuge. You guessed it, the Peregrine Falcon (Falco peregrinus)!

Oh, I almost forgot, I promised you some American Coot (Fulica americana) fun. There must have been a shallow spot in the water where, every time a coot swam over that spot, they decided to up end and swim for the bottom.

Well at one point, it turned into a full blown frenzy.

It was so fascinating and funny, I filmed it.

As I left the photography blind around noon, there was a huge flock of hundreds of White-faced Ibis (Plegadis chihi) foraging in the agricultural fields adjacent to the refuge.

Do you enjoy the National Wildlife Refuges in your area? National Wildlife Refuges have been underfunded since President Theodore Roosevelt created the first refuge in 1903 and Congress refused to appropriate money to manage it. Without adequate funding, habitats are not restored, invasive species are left unchecked, poaching and other illegal activities occur and our nation’s wildlife suffers1.

America’s National Wildlife Refuge System is the world’s largest network of protected areas dedicated to wildlife conservation. For more than a century, the refuge system has been integral to bringing species such as the whooping crane back from the brink of extinction. Each year, tens of millions of people visit and enjoy national wildlife refuges in every U.S. state and territory, infusing nearly $1.74 billion into local economies and creating more than 32,500 U.S. jobs2.

Would you like to be part of creating an additional income stream for our National Wildlife Refuge System? If you haven’t heard of our proposal for a Wildlife Conservation Stamp, please check out our new website where we will be promoting a plan to get an alternative stamp issued to increase revenue for our refuges.

We are looking for bird enthusiasts, photographers, bloggers, biologists, hikers, conservationists, wildlife rehabilitators, scientists, teachers, artists and anyone else with a common passion and concern for our nation’s wildlife and wild habitats to join us in encouraging our legislators to create an alternative to the Duck Stamp for non-consumptive users of the wildlife refuges.

If this sounds like a great idea to you, providing a consistent source of income for our refuges, separate but parallel to the current Federal Duck Stamp program, please send me an email with a short bio and a photo (at least 150 x 150 pixels) to place on our “About Us” page. We will keep you updated on our progress in this endeavor and entertain suggestions on the best way to implement our proposal.

I hope to hear from you soon! In the meantime, enjoy The Bird D’pot and Wild Bird Wednesday!