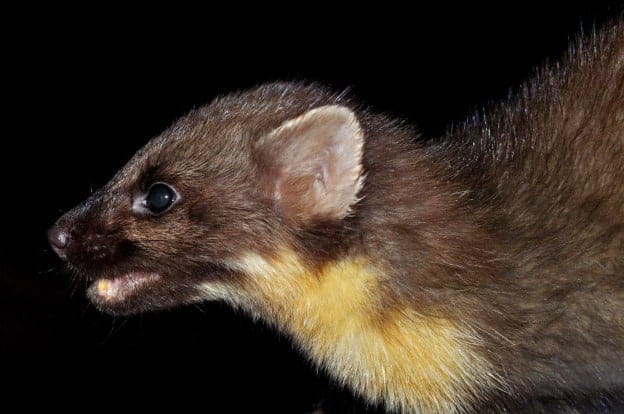 Currently there are a few stories hitting the news across Mull; the possibility of Mull becoming a national nature reserve and the issue of the pine marten (Martes martes) breeding on the isle. It is safe to say I have some strong opinions on both of these hot topics.

Here on the isle we have a monthly magazine, “Round and About” which is great for local issues, regular columns, an events calendar and more. I picked up this months copy as the ranger service and Mull Eagle Watch both have a section. I became increasingly irate as I read the articles regarding these topics.

First of all, the pine martens. Mull has an interesting lack of species, primarily due to being an island, we have no red fox (Vulpes vulpes), neither species of squirrel (Sciurus vulgaris/carolinensis) and no badgers (Meles meles).

The Scottish wildcat (Felis silvestris silvestris) is thought to have been wiped out many years ago and we now instead have a very substantial number of feral cats. Following increasing numbers of sightings, a carcass and evidence of breeding, Scottish Natural Heritage commissioned a report into the pine marten on Mull, the main aims of the report being to access the risk of the species to the islands flora and fauna and to establish whether the species had historically been native.

The main findings of the SNH report were:

There are three possible management plans: eradicate them completely from the island, localised control to prevent spread and increase of population or do nothing. Being a conservationist, I fully understand how fragile island ecosystems can be and any invasive, non-native species should usually be controlled to prevent problems with native species.

I spend my days telling people how important management and control of deer is across the UK and Mull, how important the control of American mink (Neovison vison) is to protect our birds and other wildlife. But, I really struggle to be supportive of the plans to trap and kill (or trap and relocate) pine martens on the island. I have various reasons and it isn’t just because they’re cute!

Additionally, this is yet another example of a lack of understanding of ecology and population ecology; if a predator can survive and increase in number it generally means the prey species are numerous and doing well. Pine martens would level out naturally, they won’t continue to increase until they can’t find food – thats not how ecology works. Very different with an invasive non-native species like the mink which was never a part of our British evolution.

My main reason why I don’t agree involves the hypocrisy or just complete ignorance we’re displaying here. I mentioned feral cats earlier, the island has a huge population of them, they breed out in the wild and they hunt birds, raid nests, prey on small mammals, reptiles and amphibians.

This is a man-made problem, our problem, yet we seem to completely ignore it. I would love to see a study on the feral cat population and an inquiry into how many bird species they impact, along with the protected reptiles that pine martens will be blamed for damaging.

I don’t go one day without seeing a feral cat stalking around the Mull habitat. Until we do something about this wildlife fiasco I do not understand how we can target a native, British, rare and tourism boosting species.

Especially when this island is a mecca for wildlife lovers – start killing off cute fluffy pine martens and I’m sure we’ll have a disgruntled uproar on our hands.

I’m all for a control possibility for problematic individual species preying on poultry IF it will placate many of the locals who are hands down against the species. But to attempt to completely eradicate them is surely ridiculous, also a huge drain on funding which could be much better implemented elsewhere.

We still have a mink problem which could be tackled much more head on with funding, time and the right attitude, or money could go into education, better parking areas on our busy single track roads or reforestation of our ancient woodlands. A lot of the articles I have read regarding the pine marten here on the island are very negatively biased, often failing to mention the possible positive impacts the species can have, tourism being one of them.

People pay to see pine martens and having the species here is yet another draw for our wildlife loving visitors. I’ve also seen rash comments about the species somehow making it to the Treshnish Isles where we have hugely important seabird colonies. This is highly unlikely and additionally the habitat is completely the opposite to what a pine marten requires, perfect for mink though!

Moving on, another opinion here on the isle involves Mull becoming a NNR, a National Nature reserve. A few islanders are really up for the idea listing some potential benefits like active conservation management, additional funding for rangers and enhancing biodiversity, and organization of various existing festivals, historical sites, events and more. Drawbacks include increased bureaucracy, restrictions on planning and development, interference from national government and the general opinion that the structure of national parks is poor and ill-defined.

My home is within Northumberland National Park and I also studied right next to the Lake District NNR. In both of these parks the wildlife is struggling, the management is lacking, planning is restricted, development is restricted and things don’t change. The funds primarily go to providing top managers with an office and desk and not into providing rangers on the ground.

Habitats are conserved for the wrong reasons, they are kept in a standstill – they stay looking how people expect. They can’t change because these desolate habitats are protected in the NNR. In both Northumberland and Cumbria we are throwing thousands of pounds at habitat that is scarred, degraded and deforested due to our actions, the species that are found there are the only ones that can withstand our “management” and we prevent the habitat recuperating, essentially locking out species.

I really don’t see Mull benefiting from the designation. We have a booming tourism industry already, we don’t need to be named a nature reserve. The island already is a nature reserve, without coordination and interference from distant governing bodies that have never stepped foot on the land.

A national park authority would be another group of people that have the time to argue over topics and would isolate the busy locals who either don’t have the time or inclination to get involved. Things run smoothly as it is and are continuing to be improved slowly through funding projects like the Ulva ferry pontoons.

The term “why fix something if its not broke” springs to mind. additionally, it would be interesting to be a famed national nature reserve whilst actively trapping and culling a native, loved British species.

There is absolutely no justification for a cull or trying to eradicate the Pine Marten on Mull – I fully agree with you. Thanks, Rachel, for highlighting this controversial issue.