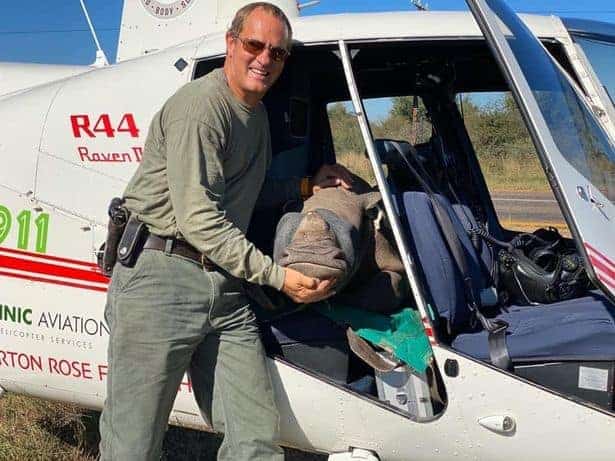 An emergency helicopter service is rescuing rhinos that get injured or orphaned by heartless poachers. Since its launch in 2018, Rhino 911 has been called out hundreds of times. Baby rhinos airlifted to safety included one-month-old Lottie, found desperately trying to suckle from her slaughtered mum.

Pilot and co-founder of the South African charity, Nico Jacobs, said: “It is very disturbing to get a situation where a mother has been hacked to death and the baby is lying next to her dehydrated needing urgent attention.

“Last year we had calls to over 40 rhinos in a period of 72 hours. That is how critical this situation is.”

He explained that if rhino poaching continues at its current level, the species will soon be hunted to extinction.

Nico said: “Every year poaching accounts for the death of 1,600 rhinos murdered for their horns, leaving hundreds of orphans behind.

“Their horns are one of the world’s most expensive commodities – worth more than gold.”

But he added: “Despite its value it is not different to the stuff on your fingernails.”

Last year, as the pandemic grounded flights, Nico said that poaching had “ramped up significantly” in the deserted wildlife reserves, where the gates were shut to tourists. A government-approved programme was launched in which dozens of rhinos were dehorned to prevent poachers taking advantage of the post-Covid-19 crash in tourism.

The exercise in Pilanesberg National Park and the Mafikeng and Botsalano game reserves – all north-west of Johannesburg – left the rhinos with horn rumps too small to interest poachers.

The number of rhinos in the parks, and how many have been poached, are kept secret to protect the animals.

The exact location of the The Rhino Orphanage in Limpopo Province, where many of the orphans are cared for, is also kept secret for the same reason.

Powdered rhino horn is used in traditional Asian medicine as a supposed cure for a range of illnesses – from hangovers to fevers and even cancer.

“We need more pilots and more equipment as we can’t respond to all the calls we receive for assistance.

“If people want their children to see rhinos when they grow up, urgent action is needed. At this rate they will disappear in my lifetime.”

This article was first published by The Mirror on 14 January 2021. Lead Image: Their horns are one of the world’s most expensive commodities – worth more than gold (Image: Rhino 911).