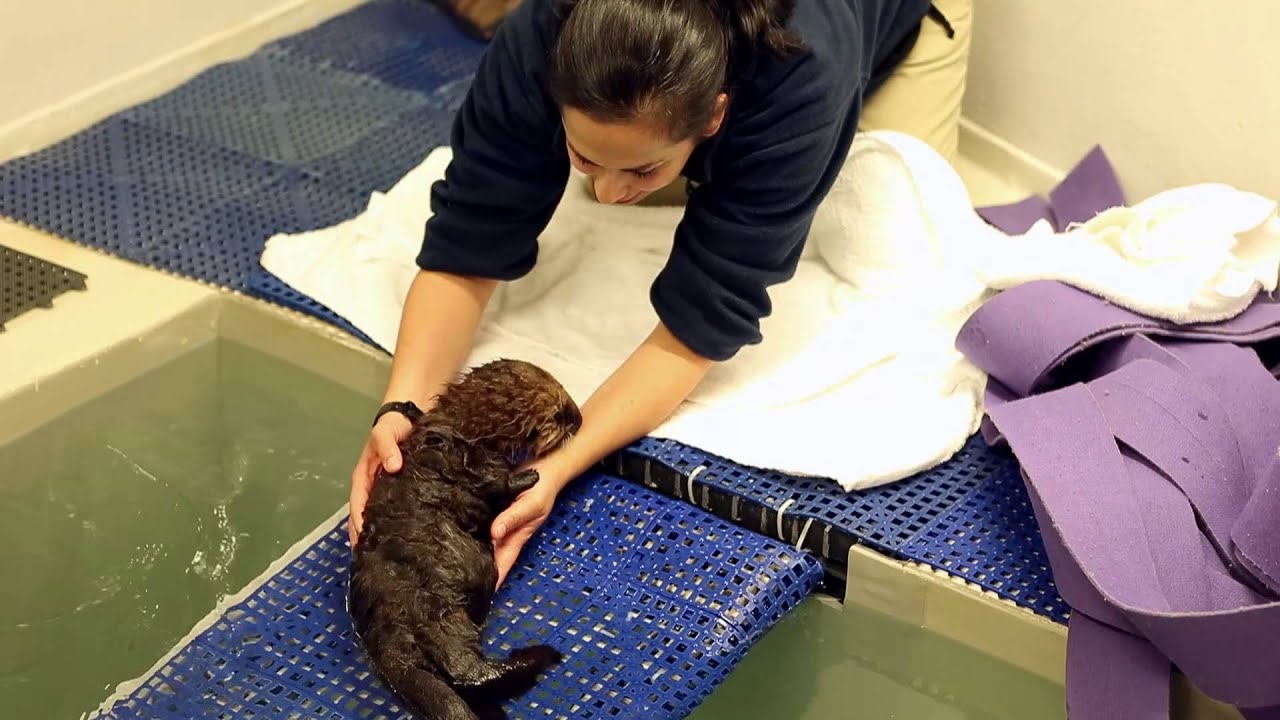 Just as it takes a village to raise a child, it takes a team of animal experts to raise an orphaned sea otter.

A baby southern sea otter named Pup 681 has made a splash online since a video of her squealing, squirming, and learning to swim at Chicago’s Shedd Aquarium went up on YouTube.

The pup, rescued along the shore of California on September 30, was placed in intensive care at Monterey Bay Aquarium for four weeks before moving to Shedd.

The furry pup is not only adorable but also rare: Her species has been decimated, by the fur trade historically and by modern threats such as oil spills and climate change.

Southern sea otters are listed as threatened by the U.S. Fish and Wildlife Service, and approximately 3,000 animals remain in the wild. (See pictures of threatened marine species.)

National Geographic asked Karl Mayer, a sea otter conservationist and one of Pup 681’s caretakers at the Monterey Bay Aquarium, to tell us more about how to bring up an otter in captivity.

681 was stranded north of Santa Cruz, in an area [where sharks often eat otters]. Something could have happened to mom. [Or] mom could have been in pretty weak condition and couldn’t care for her. We don’t really know.

How’s her condition in the video? Being a rescued, orphan pup, how does she compare with wild pups her age?

She’s a little behind where you see wild pups. At five weeks old [her age in the video], wild pups are starting to be much more active in the water and are fully capable of swimming directionally. 681 isn’t quite there yet. (See cute pictures of sea otters in their native habitat.)

When we picked her up at a week old, she was in pretty good condition, healthy but underweight. She’s still in very good condition, and starting the shedding process. Once a wild pup sheds her pup coat, she’s a fully functional juvenile animal, capable of diving, retrieving food, and weaning herself off of formula. But those developmental milestones aren’t as crucial to 681, because she’ll probably be in captivity for the rest of her life.

Why is she squealing?

Sea otters have a range of sounds. They’ll vocalize to indicate any kind of discomfort, when they’re starting to get cold, prior to defecating, when you’re grooming them. They’ll also vocalize happy noises when they’re relatively content. Here, she’s probably indicating she’s a little cold in the water.

When they put her in the water, are they teaching her to swim?

It’s not so much “teaching.” I would characterize it as encouraging to develop otter behavior. Human caretakers are not acting as role models, climbing into the pools and swimming with them, so much as trying to stimulate any kind of activity—prodding her, encouraging her.

In the wild, mom would be actively swimming around in the ocean. And they’ll want to look for mom, and will go underwater to try to follow her. That developmental encouragement, you need to replace that. (Related: “Sea Otter Moms Risk Lives to Raise Babies.”)

Around the minute mark, she’s wiping her face. What’s going on there?

So when they’re drying her off, it’s because she can’t do it herself?

Right. In the wild, mom would be doing the bulk of the grooming. Maintaining fur quality is one of the most important tasks in rearing a pup. If you have residual wetness, the fur starts to clump and doesn’t lie together properly. And that starts to affect the pup’s development.

What are those purple straps, and why is she placed in them?

That purple stuff is the felt straps in [a] drive-through car wash that flops back and down to clean the windows. The nice thing about it is that it floats. In the ocean, kelp is anchored but floats up on the surface. Sea otters like to roll around in and fall asleep in [kelp]. So the purple felt acts as a proxy that mimics her natural environment. (Read about how sea otters may be helping to reduce carbon emissions.)

What are the next stages in her growing up?

Sea otters have a really long dependency period, [of] six months. The time line should coincide with the development period in the wild. At eight weeks old, she’ll begin to seek solid food instead of formula.

What are some of the challenges human caretakers face in rearing a pup?

Initially, the biggest thing is adjusting to the new food—puppy formula. There’s a fairly reasonable likelihood that mild bloating, gas, diarrhea, and other issues [will occur]. A [young pup] like 681 who was with mom for a very short amount of time, her body probably lacks colostrum [a mammal milk that contains antibodies]. So she’s more susceptible to things like gastrointestinal disorders and infections. (Also read about new diseases hitting sea otters in California.)

And there’s also the development of mats in her fur, because she’s incapable of grooming. Basically she’s an uncomfortable, colicky infant.

This article was first published by National Geographic on 12 Nov 2014.