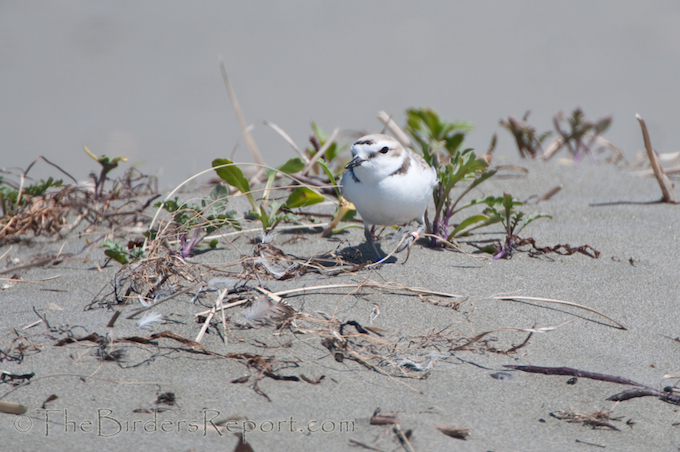 The Pacific Coast population of the Western Snowy Plover (Charadrius nivosus nivosus) is federally listed under the Endangered Species Act of 1973 as threatened. They are a Bird Species of Special Concern in California and were listed as endangered under the Washington Department of Game Policy No. 402 in 1981, and as threatened by the Oregon Fish and Wildlife Commission in 1975. The threatened status in Oregon was reaffirmed in 1989 under the Oregon Endangered Species Act1.

Designated critical habitat includes unique and increasingly rare coastal beach-dune ecosystem habitat along the Pacific Coast essential to the survival and recovery of the plover. A total of 47 units have been designated in California, nine in Oregon, and four in Washington. Below are the designated area maps for Northern and Southern California.

This is what the habitat looked like at Clam Beach where I took these photos. Note the tall grasses on the dunes in the upper right side of the photo. This is one of the most significant causes of habitat loss for coastal breeding Western Snowy Plovers, the encroachment of introduced European beachgrass (Ammophila arenaria) and American beachgrass (Ammophila breviligulata). Introduced beachgrass contributes to habitat loss by reducing the amount of open, sandy habitat, steepening the beaches, and increasing habitat for predators.

The sparsely covered sandy area in the photo above has had the beachgrass removed and is roped off with signage to help protect the plover’s breeding grounds. With miles of beaches open to the public, this small area (about the size of a football field) seemed like an insignificantly small contribution to the conservation of this threatened species.

It took me awhile to find this section of beach where I was hoping to spot some Western Snowy Plovers. At the Godwit Days Spring Migration Bird Festival I had signed up for a trip to the South Spit of Humboldt Bay hoping to see some of these threatened birds but the excursion only took us to a the location of a Snowy Plover restoration area which had not actually been occupied yet. On that trip I met Drew who was also hoping to find the elusive plover. We made plans to meet at Clam Beach where I was told the Western Snowy Plover could be found.

We walked a long way before spotting the roped off area. Once we found it we surveyed the area (from outside the ropes of course). I was thinking we’d be lucky to spot one of the birds way out in the middle of the sandy landscape, but alas, I spotted one within thirty feet of the ropes! He was laying quietly atop one of the sand dunes. Drew and I were so excited to find our quarry that we both took several photos of our first sighting from all angles.

As we retreated from that location, we almost literally stumbled upon a pair of Western Snowy Plovers that were roaming outside of the roped off area. The photo of the male above and this female below are the pair that we cautiously photographed to our hearts content.

I’m not sure what they were doing but they walked among the small sand hills, unprotected on the open beach as we observed from a safe distance.

The female following the male with no obvious purpose that I could discern. According to Birds of North America Online, Pacific Coast Western Snowy Plovers begin egg laying in Humboldt County in March. They typically lay 3 eggs during all hours of the day and night with an average interval of 60 hours between eggs.

During this egg laying period, the adults may be away from their territory for more than a third of daylight hours3, so maybe this pair was simply resting.

Once they begin incubation, after the last egg is laid, both parents incubate the eggs, the female during the day and the male at night. The chicks hatch about 30 days later. They are precocial and leave the nest usually within one to three hours after hatching.

The wind was blowing pretty good and they would occasionally close their eyes to avoid the sand storm.

At one point, an off leash dog came running toward the birds unintentionally, not even seeing them, as the female plover stood up in an alert pose (top). We quickly chased that dog off as his owners casually strode along the beach several hundred yards away.

This is another huge problem for these little shorebirds, sharing the beaches with humans and off-leash dogs.

This guy however was comfortable enough to stop and preen as his mate looked on.