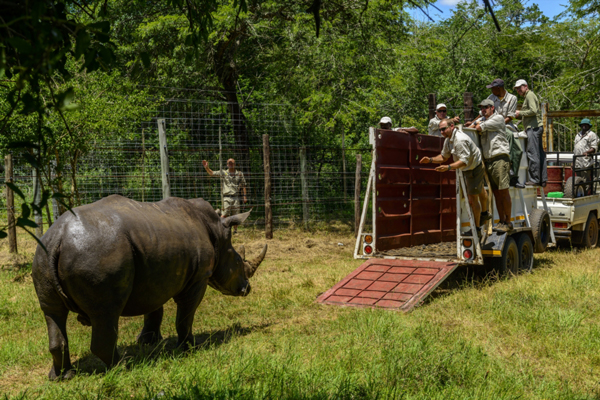 A private safari company has moved six white rhinos (Ceratotherium simum) from their home in South Africa to Botswana in a bid to save them from an out-of-control poaching crisis in their native land. Currently, around two rhinos are killed everyday in South Africa for their horns, which are then smuggled to East Asia.

This month &Beyond translocated six rhinos from their Phinda Private Game Reserve in South Africa to Botswana’s Okavango Delta. The move was made shortly after the company helped arrest a number of poachers near the reserve. &Beyond says in a press release that the rhinos will receive better protection in Botswana.

“Botswana has a strong security and monitoring framework in place whereby the Department of Wildlife Anti-Poaching Unit and the Botswana Defence Force help to protect the species,” the tour company writes.

On arrival in Botswana, the team confirmed some good news: one of the females was pregnant. Given on-going security concerns the rhinos will also be monitored 24/7.

“All six rhino have been collared and microchipped for research and monitoring purposes and they will be tracked daily by our research team. The information gathered will help guide and secure future translocations,” the company notes.

“Guests visiting our lodges in the Okavango Delta will also be able to enjoy guided nature walks with our expert guides to view these endangered animals in their new home.”

In the last 18 months, Africa has lost over 1,000 rhinos to poachers. Rhino horns are sought by consumers in East Asia, who view them as a curative despite scientific evidence to the contrary. Increasing demand in places like Vietnam has pushed illegal rhino horn powder prices past gold.

White rhinos are the world’s most populous, which also makes them the easiest target for poachers. Listed as Vulnerable by the IUCN Red List, around 20,000 white rhinos survive in the wild. The species made an incredible comeback after falling to around just 20-50 animals in the early Twentieth Century due to relentless hunting.

Over 90 percent of the world’s white rhinos are found in South Africa.