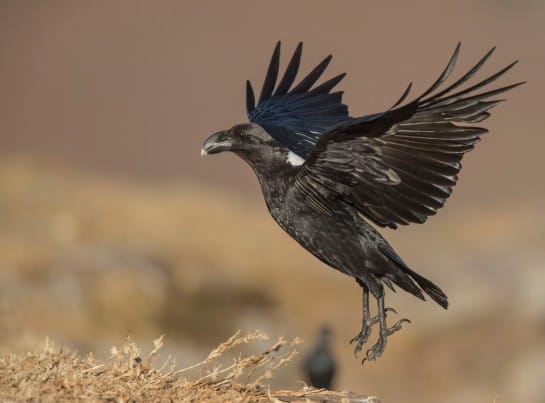 The vulture’s hide at Giant’s Castle is a raptor hide first and foremost. The setting on the edge of a middleberg ridge is spectacular. Placing the bones for the raptors, mainly for the Bearded Vultures, supplements their natural food sources which is diminishing due to loss of habitat and is the main purpose of the feeding. The fat and marrow on the bones attracts a variety of smaller avian opportunists.The larger ones are White-necked Ravens and Red-winged Starlings.

“I learn from everything I look at, good, bad or indifferent. I follow my eye reflexively; if it is drawn toward something, I pay attention and try to find out why. You train your eye, build up a mental image bank, and constantly try to pinpoint why some things are convincing and others aren’t.”~ Roberta Smith

All the avian activity seems to attract a number of other species from chats to bishops, and pigeons to sunbirds and shrikes. Obviously they don’t feed on the fat or marrow but there are a grasses which disperse seeds and a number of indigenous trees along the edge of the cliff which attract nectar feeders.

“We all live under the same sky, but we don’t all have the same horizon.”

I have preconceived ideas about ravens and crows after seeing Alfred Hitchcock’s film ‘Birds’ one Saturday night as a 13-year-old in my first year of boarding school at Falcon College in Zimbabwe in 1966. The movie really scared us as kids. It was about many types of birds, but mainly crows or ravens which menacingly gathered at the local school.

As soon as the adults attempted to get their children away from the school the birds attacked them, savagely. The plot progressed from bad to worse where the birds began attacking homes and started killing people. As a movie it made an indelible impression on my young mind with clear recollection 50 years later.

After the movie was finished, we had to get back to our dormitories in the pitch dark. Needless to say we ran back as fast as we could as if our lives depended on it. In the movie all sorts of birds attacked the people in the village but the crows and ravens really stuck in my mind.

It is evident that ravens and crows are highly intelligent birds. They work in packs and are playground bullies intimidating birds smaller than themselves but deferring to larger raptors.

These White-necked Ravens will hustle even Black-backed Jackals which are much larger, but only if they have numbers on their side.

On the second day the wind started to blow quite hard. The smaller birds sought cover, but the ravens reveled playfully in the turbulence. Their flying skills have to be seen to be believed – they are master “wing men”.

A Lanner Falcon arrived at one point and started dive bombing these ravens. It was an amazing sight. The Lanner was smaller than the ravens, but was considerably faster.

It harassed a few ravens repeatedly, nearly hitting them on several occasions. You can only marvel at both species’ flying skills.

“Seeing is a gift that comes with practice.”

The seed-eaters were more sedate and easily scared by any shadow moving quickly across the ground near them. With falcons and buzzards around, the seed-eaters needed to be very wary.

A few Speckled Pigeons flew onto the vulture’s dining table to forage for grass seeds. They are not well camouflaged on the grass but their colouring is perfect when they are on the rocks.

Seed-eaters abounded. There were groups of canaries and a few yellow bishop males (with their girls) also flew in to feed on the grass seed. They were very skittish being at the bottom of the food-chain.

The next image is of a Yellow Bishop male in non-breeding plumage.

“There’s a saying among prospectors: Go out looking for one thing, and that’s all you’ll ever find.”

There was also a resident pair of Buff-streaked Chats in front of the hide. They were versatile feeders eating insects and pecking at the fat and marrow on the bones. These chats will also feed on nectar when available. The male is the bold black and white coloured bird with a buff chest and breast.

The female Buff-streaked Chat is just as confident but is an altogether simpler looking bird. The streaks on her buff breast and chest are clearly evident. These chats seem to prefer rocky areas, ridges and rocky outcrops. The Drakensberg is the only place I have ever seen these chats.

“These beautiful days…do not exist as mere pictures – maps hung upon the walls of memory to brighten at times when touched by association or will…They saturate themselves into every part of the body and live always.”

This male Cape Rock Thrush added to the eclectic variety of smaller birds in front of the hide. He seemed to enjoy the fat on the bones but also eats insects and small berries from the surrounding flora. This thrush’s blue-grey coloured head is its distinctive feature. The female has the same rufous chest and belly but its head is a buff colour, not the blue of the male.

The Cape Rock-thrush prefers a mountainous rocky habitat, so the hide area was perfect for it. It is an insect eater but took advantage of the insect proxy provided.

Besides ravens there were many Red-winged Starlings there to greet us first thing in the morning. They loved the fat on the bones. Interestingly, by midday they all disappeared only to return later in the afternoon. The female Red-winged Starling has a grey head and has the same distinctive brown-red primary feathers as the male.

“The true mystery of the world is the visible, not the invisible.”

A mid-morning view looking south from the vulture’s hide.

A male Red-winged Starling perched in a Glossy Mountain Bottlebrush tree. The Red-wings were feeding on the buds and nectar from the scarlet-red flowers from this tree. He was tucked in as the wind was blowing and it was a little chilly.

A female Red-winged Starling in the same Glossy Mountain Bottlebrush tree. The red flowers really stood out in the yellows and browns of winter.

“Humanity has passed through a long history of one-sidedness and of a social condition that has always contained the potential of destruction, despite its creative achievements in technology. The great project of our time must be to open the other eye: to see all-sidedly and wholly, to heal and transcend the cleavage between humanity and nature that came with early wisdom.”~ Murray Bookchin

We heard and saw male and female White-bellied Sunbirds but could not photograph them. We did not see any Malachite Sunbirds on this trip. We were fortunate to see the endemic Bokmakierie. This is a bushshrike which has a typical shrike beak with that sharp down curving hooked tip, signifying its predatory nature. The name, Bokmakierie, comes from its melodious call notes, often uttered in duet, from the top of a bush or tree.

The Bokmakierie has brilliant yellow underparts with a broad black collar separating the throat from the breast. This bushshrike has a grey head and thin yellow eyebrow. The back and wings are olive-green.

The Bokmakierie is endemic to South Africa and Zimbabwe. It is a shy bird and is normally seen in pairs. We only saw this individual. I look at the colours of this bird and am spellbound by the stunning combinations. I doubt any fashion designer would come up with the palette and hue of the colours seen on this bushshrike.