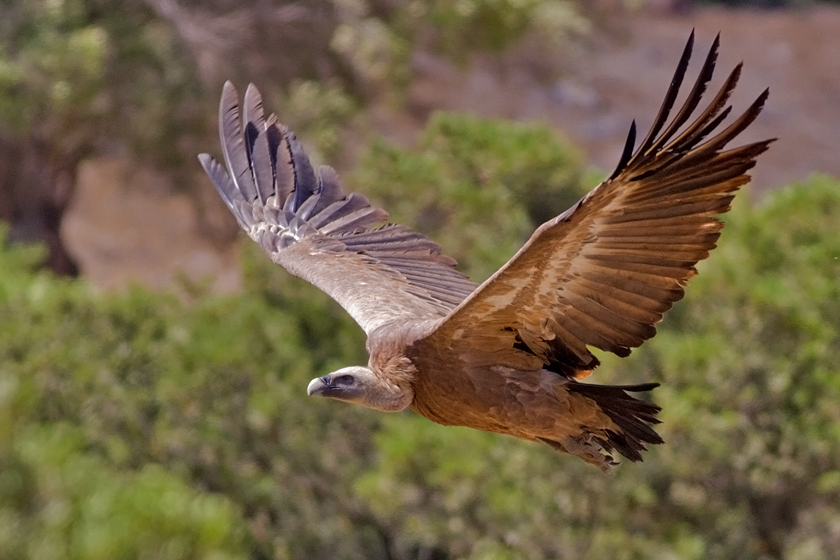 A thick layer of mist hung over the coast and main road to Tarifa as we took an early breakfast.

Driving a short distance onto the old military land, now being used by Fundación Migres, we left in the mini-bus and decided to have a look at the physical layout of The Strait of Gibraltar down at Punto Camorro near Tarifa. Here we talked about bird migration and the effects of the weather, particularly that of winds that change course or blow hard through The Strait.

The mist had already cleared and showed us how quickly things little changes in weather could develop, encouraging or hindering movement south for the avian migrants. Long plumes of low-level mist hung in the centre of the sea as we watch the wind swing around at sea-level and thicker clouds push in another direction higher up.

A change of weather was coming. There were a few birds around as the first of the raptors, a Common Buzzard flew past then landed on top of a large Aloe flower.

The fickle winds with its changing course meant that birds, especially young birds who has no experience of crossing a broad stretch of sea, would feel insecure and keep together whilst watching until the older birds attempted a crossing to Africa.

Wasting no time we left the shore and headed up into an inland area and drove straight to one of the Short-toed Eagle roosts. As we approached we couldalready see birds rising off the tree canopy and heading down to the coast. What a wonderful sight with many eagles in the sky! These hidden roosts are special places and knowing of their location requires intimate local knowledge of the area as well as the weather and are essential factors in showing people the right birds at the right time.

A short time later we drove down to one of the migration watch-points to talk to the biologists to see what other spies were passing. Most birds were passing over quite high and more and more Short-toed and Booted Eagles arrived above our heads followed by Sparrowhawks, Honey Buzzards and lots of local Griffon Vultures. There was also a sprinkling of other raptors such as Egyptian Vulture, Common Kestrel and Black Kite.

The roads were extremely busy this particular Sunday with traffic queues at most of the beach car parks. Rather than get stuck on the only road back to our coastal hotel, we took an early lunch and waited until the traffic situation calmed down.

A visit to private land at La Janda later in the afternoon was fairly productive although it was very hot and dusty. However we did manage to see Marsh and Montagu’s Harriers once more with over a hundred Yellow Wagtails and similar numbers of Goldfinch passing through. There were some Crested Larks and a few Calandra Larks as well. One lovely bird we did spot was a migrant Ortolan Bunting. White Storks and Glossy Ibis were most numerous and Green Sandpipers were seen in good numbers.

We stopped to look more closely at the dragonflies and darter that were hunting along the edges of the rice fields. Scarlet and Red-veined Darters were the commonest and some Lesser Emperors and Bluetails were seen.

Raptors on a thermal on the edge of The Strait 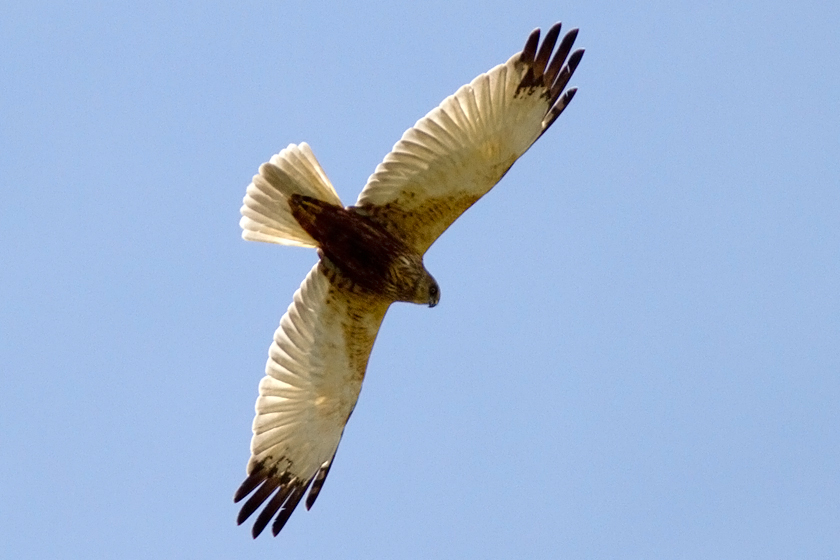 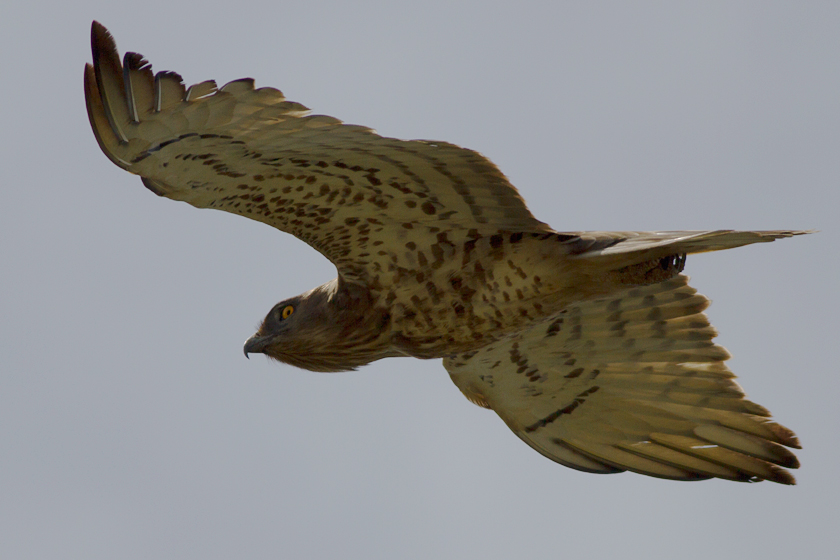 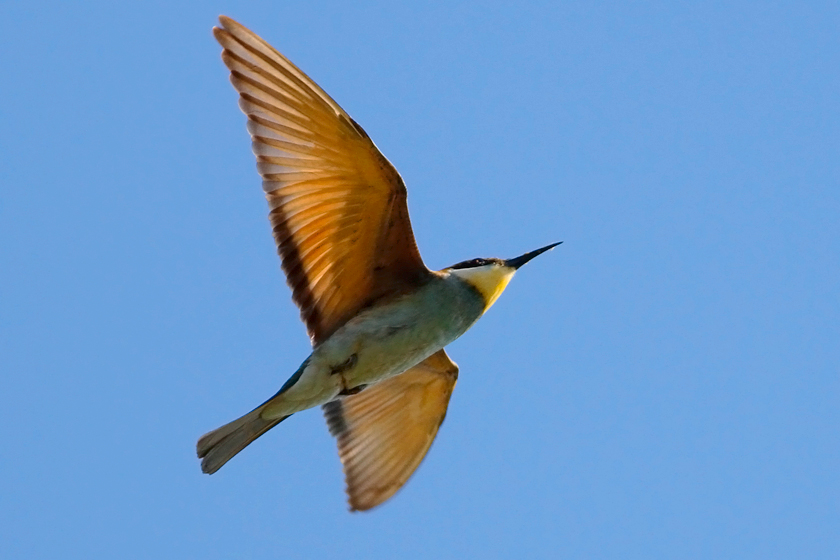 The last of the migrating European Bee-eaters leave in September

Calm conditions meant that there would be no wind assistance for migrating birds today. We departed after breakfast and headed down towards the Vejer de La Frontera area to look for more birds. Great Spotted Woodpecker and Green Woodpecker were calling but failed to appear. Down at the Natural Park of the Barbate Marshes we saw Cetti’s Warbler, Common Snipe, Black-winged Stilts and literally hundreds of Glossy Ibis. A Water Vole was seen and Turtle Doves, Jackdaws, Common Stonechats, migrant Willow Warblers and Pied Flycatchers came and went. En route a male Blue Rock Thrush was seen sitting on top of some limestone outcrops on the way past Zahara de Los Atunes and below it was a Little Owl!

Hundreds of White Storks were in the sky and on the rice-fields of La Janda as Marsh Harriers hunted in almost every direction. A few Hoopoes were quite confiding as masses of Goldfinches and quite a healthy population of Corn Buntings fed on thistles in the dried out pastures. A flock of about twenty Lesser Kestrels hunted for insects in the fresh cut sunflower fields and a few Montagu’s Harriers were noted. A lovely Booted Eagle sat on top of a pylon and some of the group managed a few close photos as it stared with it’s large orange eyes before taking off.

After lunch we travelled along The Strait and stopped on the lower slopes above Guadalmesi. Here good numbers of raptors were climbing on the last thermals on the edge of Europe, using these to gain height before attempting the crossing to Africa. We watched scores of Booted and Short-toed Eagles flying together and this was just perfect to compare the size, structure and other identification points. Black Kites also came pas and a high Bonelli’s Eagle past over going straight across to Africa. Alpine Swifts, Pallid Swifts, Common Swifts and Red-rumped Swallows also made the afternoon a very special one as we watched this incredible spectacle.

It was another hot day and the temperature was in the low 30’s centigrade. Back at the hotel we relaxed before writing up our species list and having dinner in the shade. 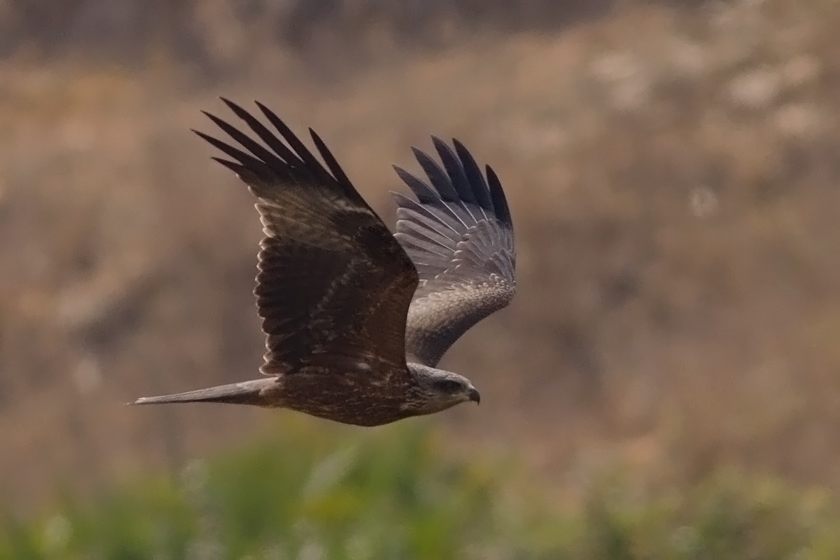 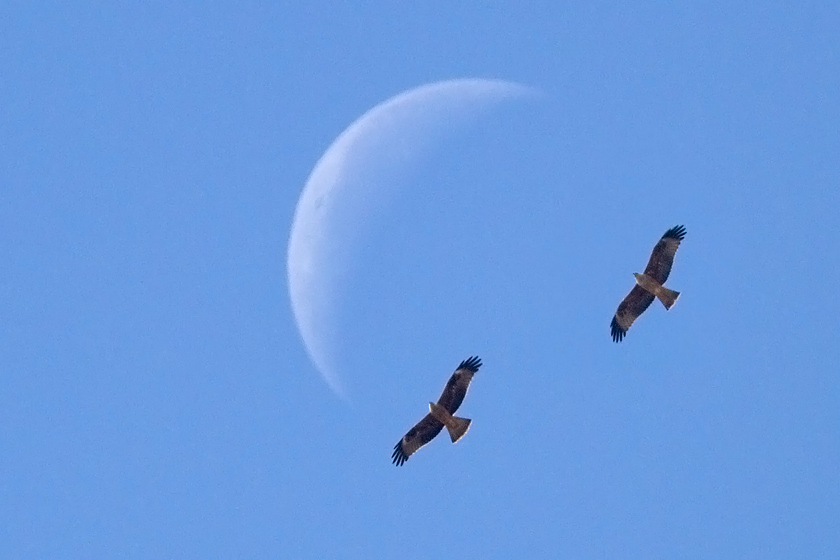 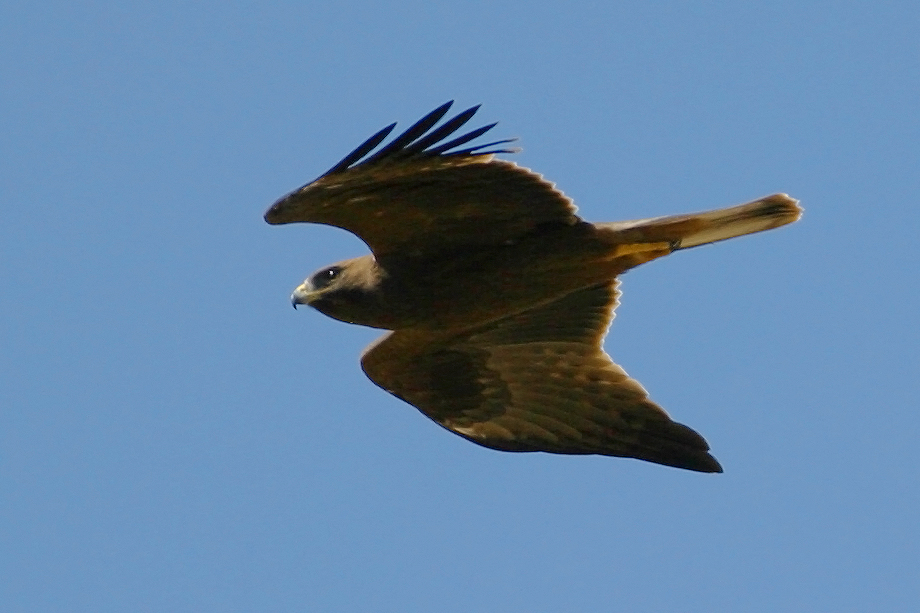 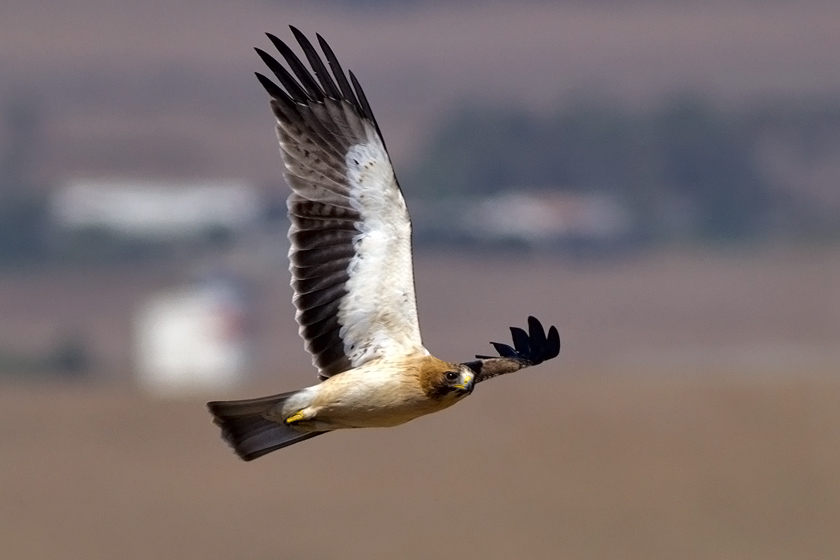 Booted Eagle, light form, the commonest form we have 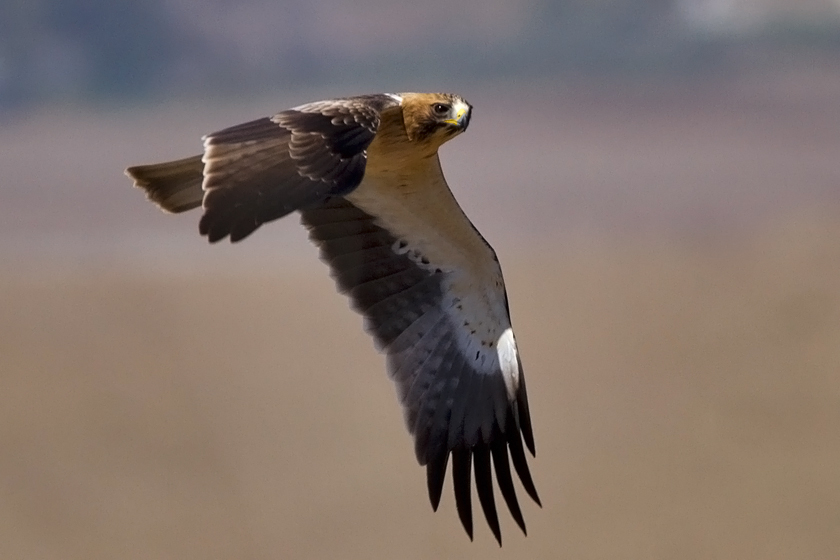 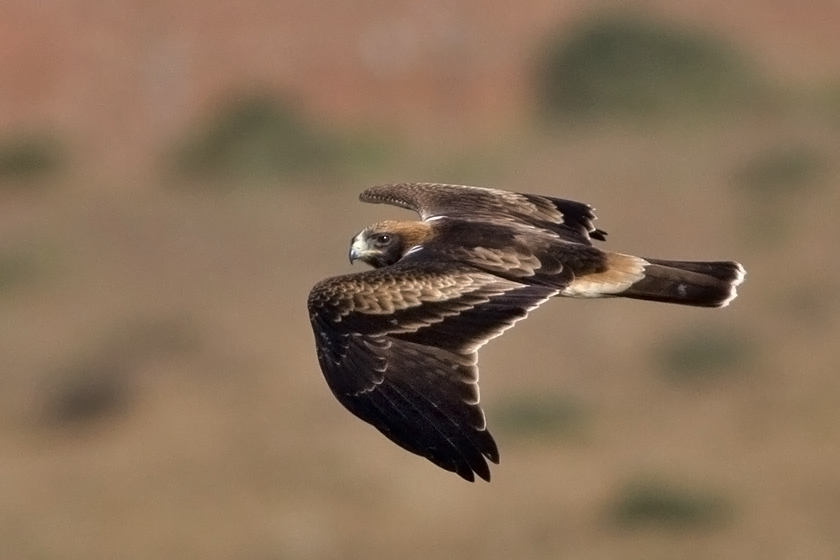 A view of the topside of the Booted Eagle 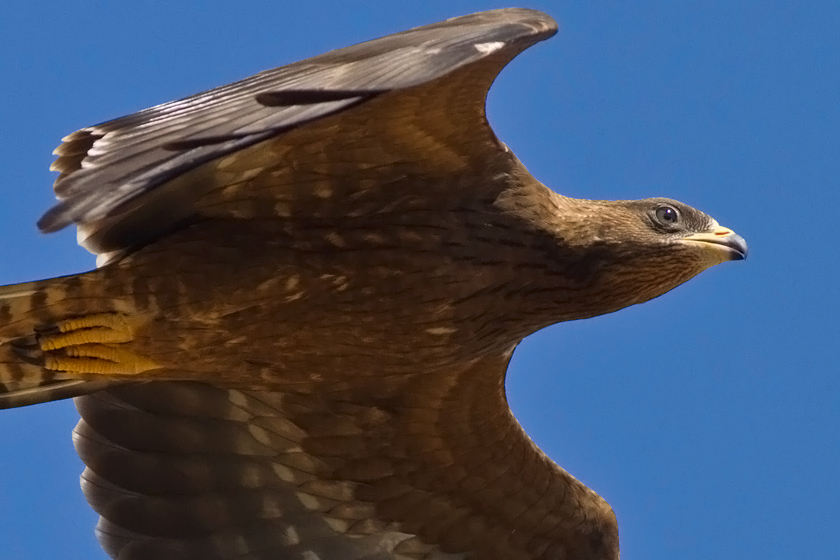 Darker, juvenile Honey Buzzards like this one can also throw you with identification 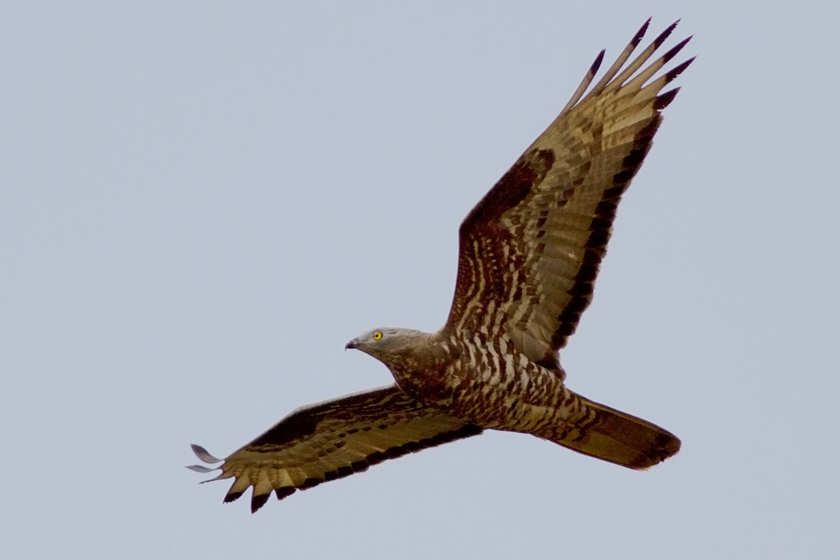 Honey Buzzard with that lovely barring on chest and wing 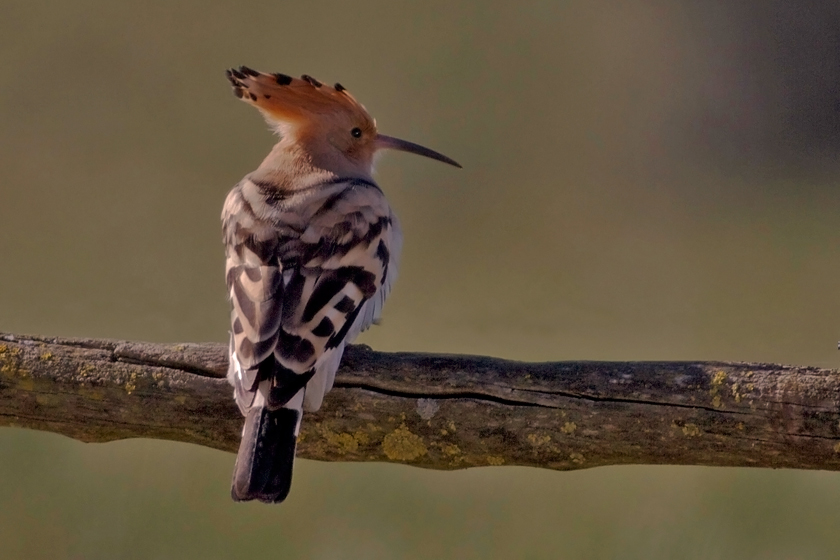 Lots of Hoopoes were seen passing through 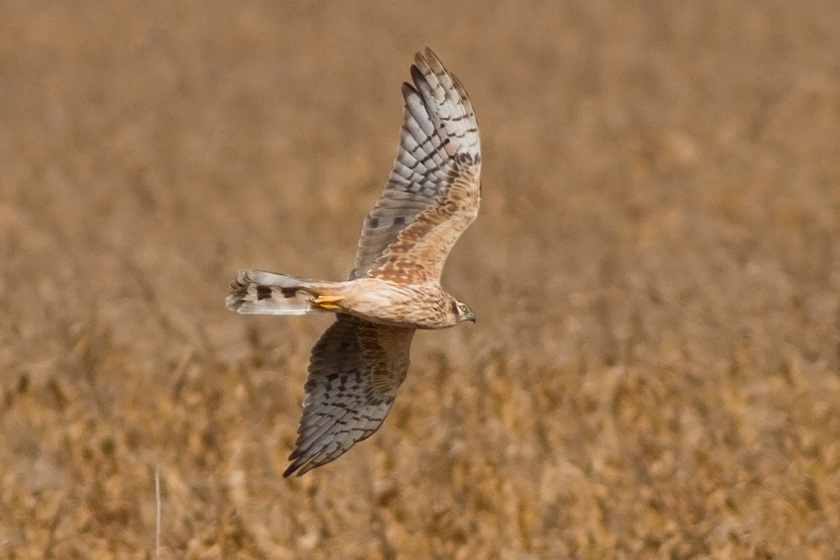 We took a journey at first light to the Playa de Los Lances and walked down to the lagoon and beach. Quickly through the dim light, we found a group of twelve Audouin’s Gulls on a sand spit and some Sandwich Terns nearby. Distant Cory’s Shearwaters were picked out as the sun rose in the sky but through a thick blanket of low cloud it was difficult to see much other than the long wings and structure of these pelagic species.

Back at the hotel we took a late breakfast then drove along the Strait past Tarifa assessing the wind conditions and raptor potential for any visible migration. There was little activity but taking a lower path down on one of the rough tracks to the coast we watched circling raptors come and go along the coastline. Most were Booted and Short-toed Eagles but one or two Sparrowhawks were also seen.

It was a very calm day both with the wind and the obvious change of weather. A depression was forming in The Mediterranean and Wednesday was going to see a big change in the wind and weather. The levante, or easterlies would be blowing once again and it was clear that many of the migrating birds could sense this are were very hesitant about crossing The Strait. We stopped on the low coastline to set up our scopes and can the narrowest point of The Strait. Here we quickly picked up both Cory’s and Balearic Shearwaters and could see the difference in size, wing markings and structure between both species.

Some Northern Gannets were also picked up, with their unmistakable profile and stiff wingbeats. A few Cormorants, Turnstones and more Audouin’s gulls were also noted.

As we took lunch at Tarifa, low, thick sea fog rolled in quietly off the waters of The Strait engulfing the town and making raptor watching impossible around the southernmost point of Europe. Driving back along The Strait to Betis we ascended to the rock face below Betijuello and had a walk through a scrubby track that was lined with mixed wild olive and cork-oaks. Down along the coastline we watched this fascinating sight of more and more of the coast being swallowed up by the fog. It was amazing to watch as we basked in the sunshine watching Pied and Spotted Flycatchers, Blue and Great Tits, Gold and Greenfinches in the trees. Several Two-tailed Pasha butterflies were seen in flight around a cork-oak and eventually settled allowing us to take some photos.

Griffon Vultures, Booted and Short-toed Eagles circled overhead and a few Marsh Harriers kept us company as we explored the track and one Black Redstart and a few Common Redstarts showed themselves.

Leaving the track we drove down the valley to stop and watch a flock of Serin feeding on dried seeds on open scrub. Just around the corner near the hamlet of Betis we came across a (Gibraltar) Long-legged Buzzard on top of an electric pylon. This was a great bird to see and we watched it for a while before it opened it’s wings and departed down the valley and out of sight.

We then took the road across to Bolonia and into the mist only to come out into the bright sun on the Sierra de La Plata. Here we had super views of Griffon Vultures and a lovely male Blue Rock Thrush. The Crag Martins that normally feed along the high rock face were nowhere to be seen which was a pity but some Booted and Short-toed Eagles came over as did some of the resident Common Kestrels that nest on the limestone crags.

We arrived back at the hotel and into the cool shade and later had another lovely dinner on the terrace. 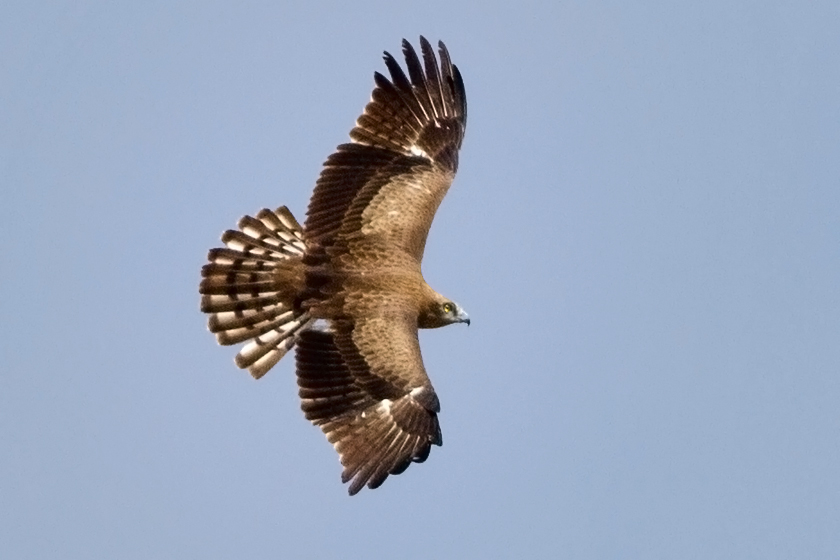 Seen from a different angle, the Short-toed Eagle is always an impressive raptor 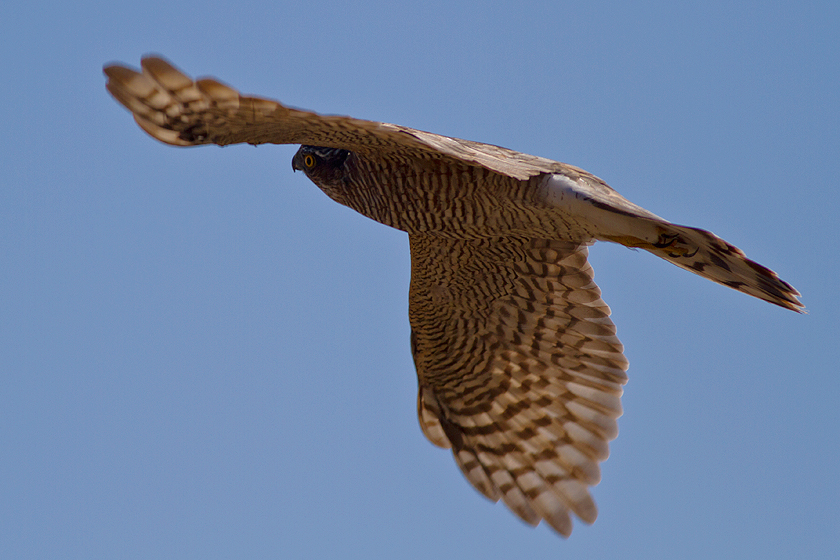 The beady eye of the fast Sparrowhawk 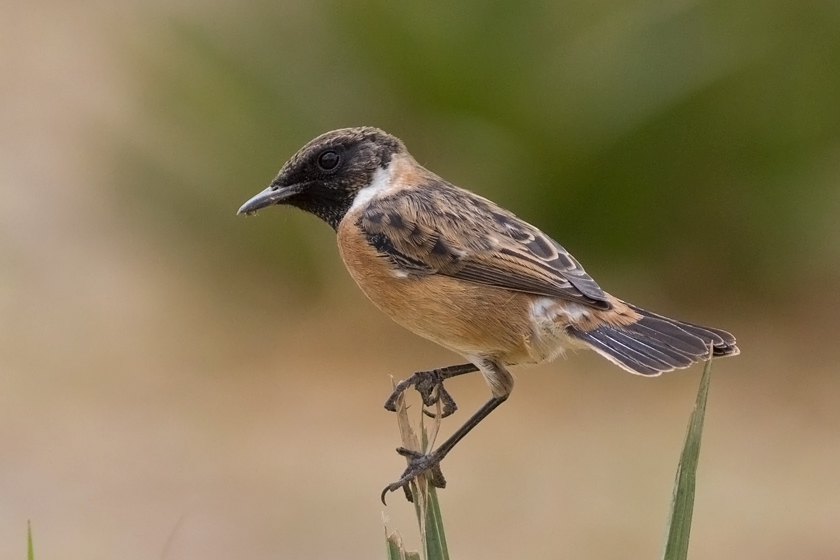 Common or not, the Common Stonechat always is a little stunner 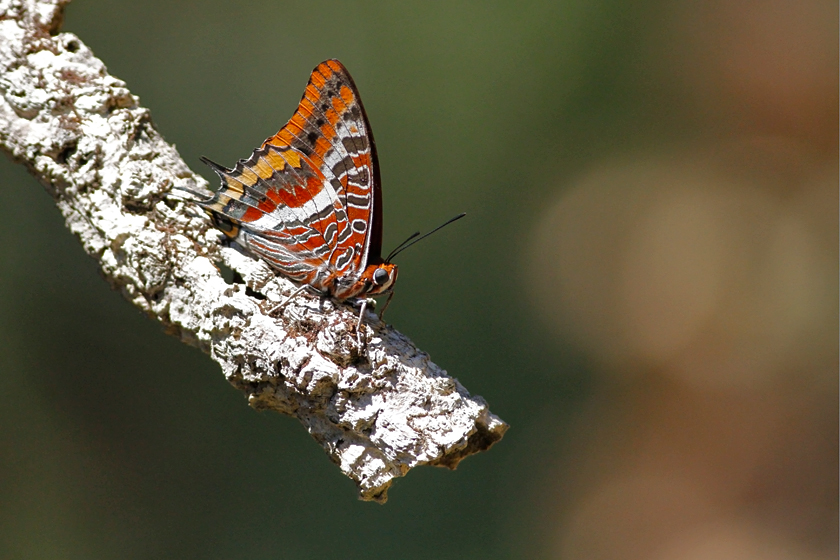 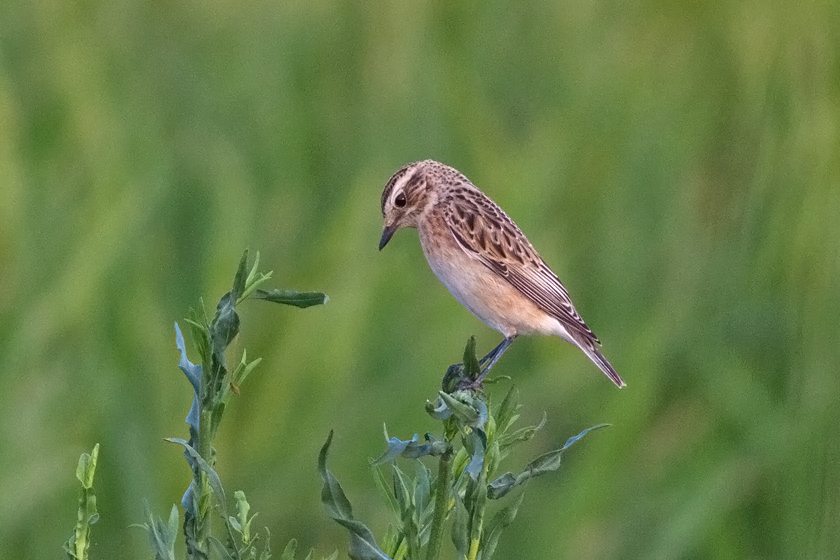 A migrant Whinchat stops off at La Janda

Our last breakfast at the hotel was taken at a leisurely pace. We loaded up the mini-bus and drove over the winding coastal road that leads past Algeciras and then turns off to Gibraltar. We were in plenty of time for the group’s flight back to the UK and just at the border with La Linea, Stephen said his farewells to the group.

Thanks you all for your good humour during our eight days together. We all had a great deal of fun as well as managing to see over 160 different species of birds and lots of other wildlife into the bargain.

Hopefully some of us will meet up again on another holiday. 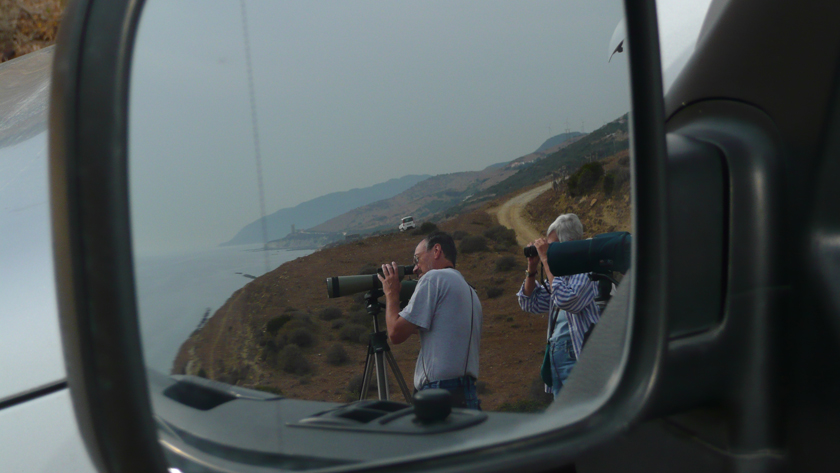 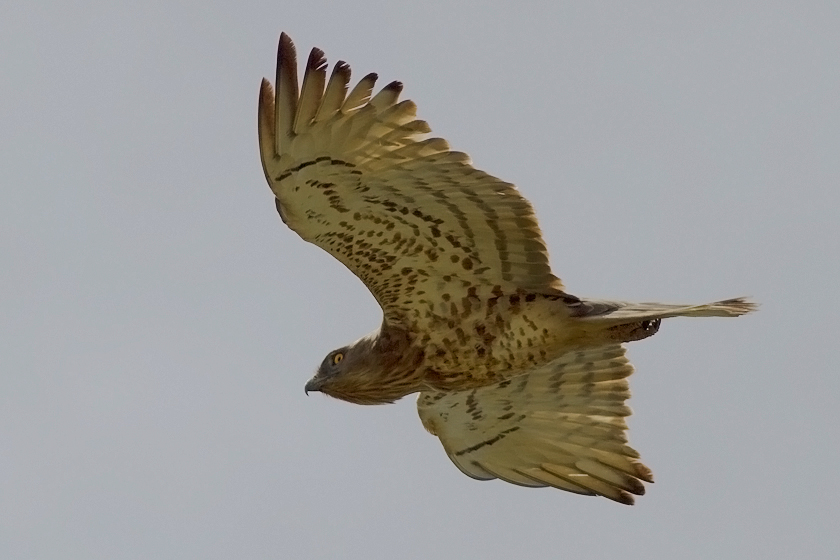 Short-toed Eagles were both numerous… 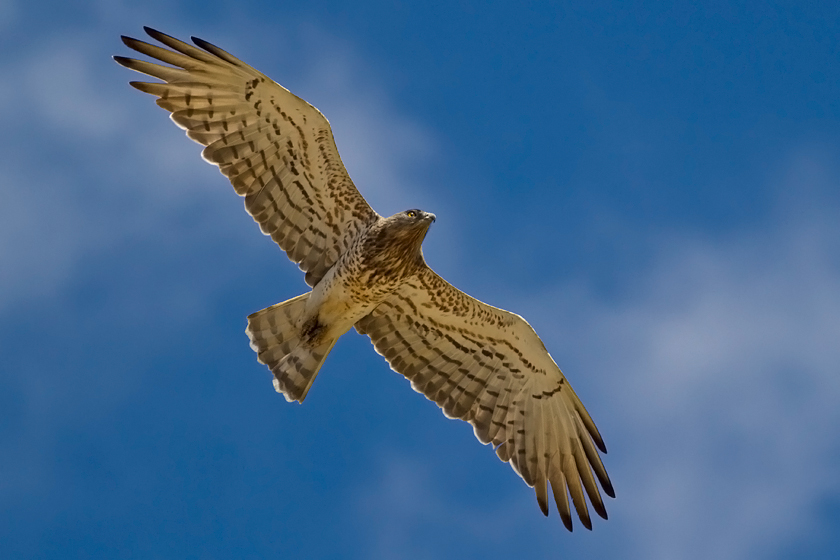