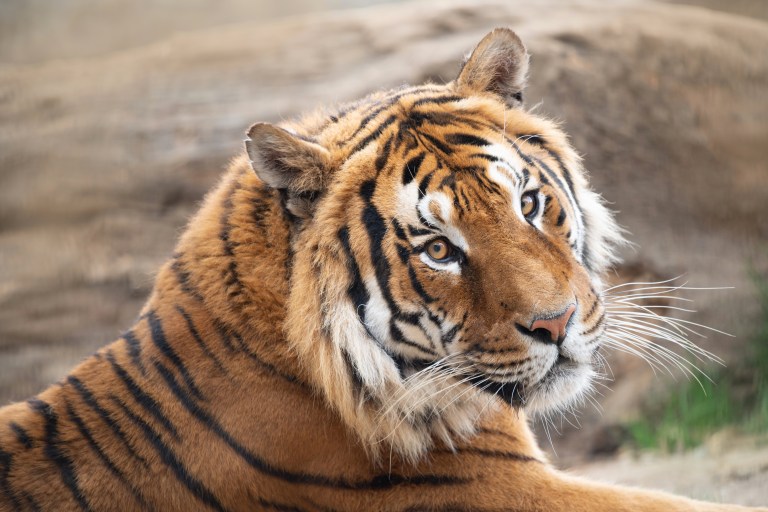 A tiger creeping around a Houston neighborhood was caught on video recently. A video sent to local station KHOU-11 shows a tiger with a collar in their owner’s front yard. Police responded to the incident.

In the video, a man is seen waving a gun at the animal. “This is about a tiger. I’m on the phone with the caller, who is a sheriff’s department sergeant, and he’s holding the owner, and the owner is trying to leave,” said Houston police dispatchers on audio captured by Broadcastify.

When police arrived, Victor Hugo Cuevas, the man believed to be the owner, put the tiger in his car and drove away. Cuevas was eventually arrested, but the tiger has yet to be found. Police are urging anyone with information on the tiger to call 713-308-3100.

Big cats kept as pets are known to suffer psychologically as a result of being housed in small confined areas. They are often denied proper veterinary care, enrichment, and nutritional food.

Cubs used for petting and photo ops are often taken from their mothers at an early age and cry out for them in their barren cages.

Being constantly handled by noisy tourists is both stressful and dangerous for these young animals. If they misbehave, starvation may be used as a punishment.

The Big Cat Public Safety Act also addresses potential harm to human beings as a result of big cats being kept as pets. This issue saw increased attention in 2011 when a zoo owner released over 50 animals before committing suicide.

From lions to tigers, baboons, chimpanzees, gorillas, and more, all these animals can be kept as pets in Texas. As the story of the man with a pet deer shows, it’s extremely dangerous for everyone involved.

A *TIGER* yep, you read that right.. CAUGHT ON CAM found roaming loose in a W. #Houston neighborhood.
Right now, we don’t know WHERE it is.
Neighbors say the big cat’s owner took off w/ it in an SUV, after it was spotted yesterday.
Here’s what we know so far. @KHOU #HTownRush pic.twitter.com/9XBslXV0TR

If you agree that wild animal ownership in Texas needs to end, sign this petition demanding that the state ban it!

This article was first published by OneGreenPlanet on 12 May 2021. Lead Image Source: Barbora Polivkova/ Shutterstock.com.