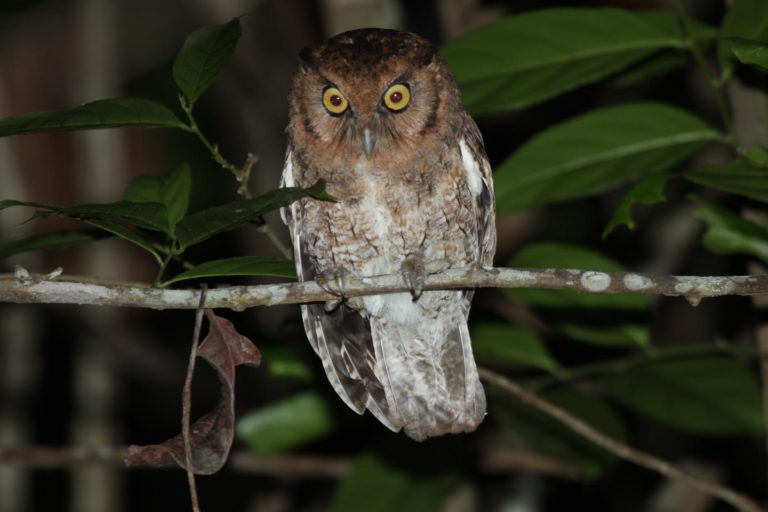 Two new species of tiny screech owls from the Amazon and Atlantic rainforests in Brazil have been described by science.

“They’re cute little owls, probably five or six inches long [13-15 centimeters], with tufts of feathers on their heads,” said John Bates, curator of birds at the Field Museum in Chicago and one of the researchers who described the new species in the journal Zootaxa. “Some are brown, some are gray, and some are in between.”

The discovery was the result of several years of work in forests, natural history collections, and the laboratory, analyzing the black-capped/tawny-bellied screech owl complex (Megascops atricapilla – M. watsonii), a group of owls with an uncertain number of species. Altogether, the researchers analyzed 252 owl specimens, 83 tape recordings of calls, and 49 genetic samples.

“To draw the birds out, we used tape recordings,” Bates said. “We’d record their calls and then play them back. The owls are territorial, and when they heard the recordings, they came out to defend their territory.”

By closely examining the appearance, calls and DNA of the screech owls, the scientists determined that there were enough differences to classify two new species.

The new screech owls have been named the Alagoas screech owl (Megascops alagoensis), in reference to the northeastern Brazilian state where it lives, and the Xingu screech owl, (Megascops stangiae) in honor of the Xingu River in Amazonia and the late Sister Dorothy Mae Stang, a U.S.-Brazilian land rights activist and Catholic nun who was murdered in 2005 by those opposed to her activism.

Although the owls are new to science, they are at risk of extinction and will likely be classified as critically endangered.

“Both new species are threatened by deforestation,” said Jason Weckstein, a co-author of the study, associate professor and curator of ornithology at the Academy of Natural Sciences of Drexel University. “The Xingu Screech Owl is endemic to the most severely burned area of the Amazon by the unprecedented 2019 fires, and the Alagoas Screech Owl should be regarded as critically endangered given the extensive forest fragmentation in the very small area where it occurs.”

The Alagoas screech owl has been found in only five isolated forest fragments in Brazil’s Atlantic Forest. Less than 10% of the Atlantic Forest remains, and only around 1% of this remaining forest is protected, despite having one of the highest degrees of species richness in the world.

Prior to the discovery, the new owl species were grouped together with two other South American species: the black-capped screech owl and the tawny-bellied screech owl. With 21 species throughout the Americas, their genus, Megascops, is the most species-rich in the Western Hemisphere. However, many of the species look alike, so it has been difficult to determine which are distinct species.

“Screech owls are considered a well-understood group compared to some other types of organisms in these areas,” Bates said. “But when you start listening to them and comparing them across geography, it turns out that there are things that people hadn’t appreciated. That’s why these new species are being described.”

“Not even professional ornithologists who have worked on owls for their entire lives would agree about the actual number of species found in this group,” said Alex Aleixo, head of the research team responsible for the study and curator of birds at the Finnish Museum of Natural History at the University of Helsinki, “so a study like ours has been awaited for a really long time.”

This article by Liz Kimbrough was first published on Mongabay.com on 1 April 2021. Lead Image: The newly described Alagoas screech owl (Megascops alagoensis) from Brazil’s Atlantic forest is thought to be critically endangered. Image by Gustavo Malacco.