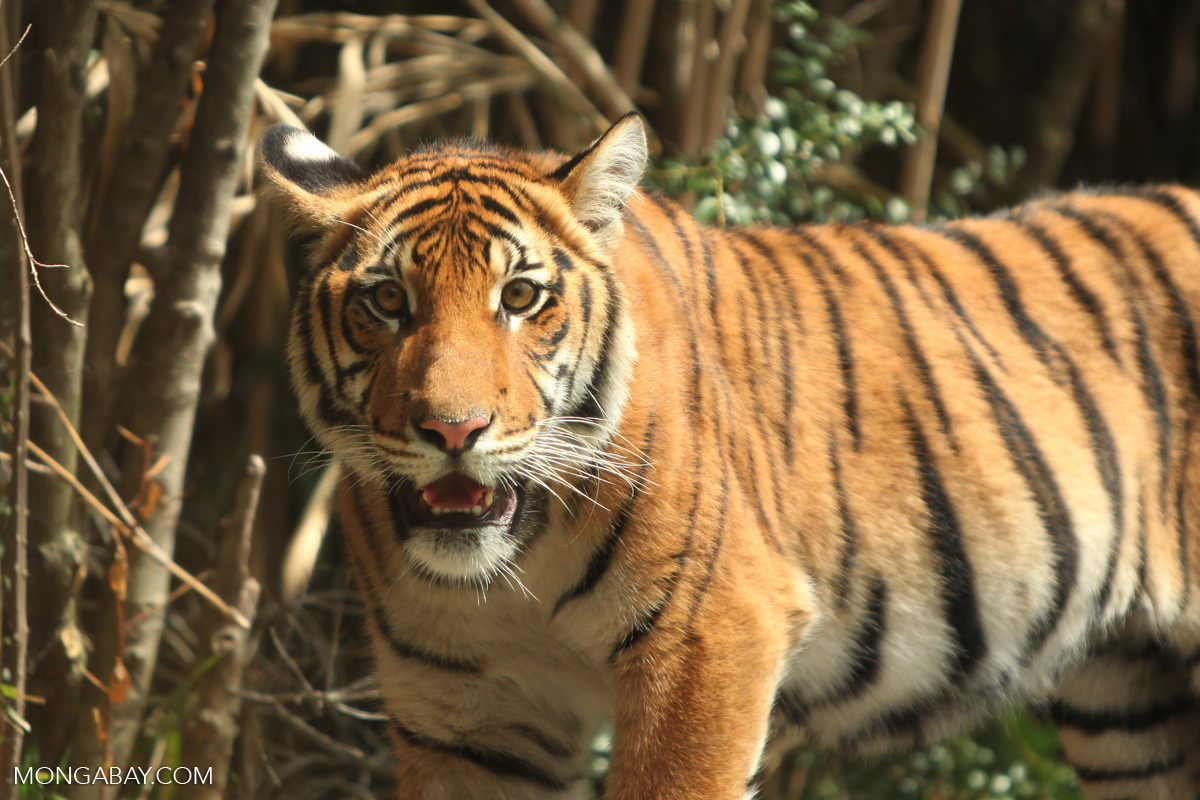 The Bukit Tigapuluh landscape in Indonesia has been sliced and diced by roads, opening its forests to threats from the outside. As forest vanishes in the region, so too does its population of endangered Sumatran tigers.

A rapidly expanding road network in Asia threatens to usher in similar problems for tigers (Panthera tigris) elsewhere in Indonesia and beyond. According to a new study published in the journal Science Advances, nearly 24,000 kilometers (15,000 miles) of new roads will be built in tiger conservation landscapes (TCLs) in Asia by 2050.

Using a recently developed global roads data set, University of Michigan conservation ecologist Neil Carter and his colleagues calculated the extent of planned and existing road networks across a 13-country range in Asia and the potential impacts of those roads to the globally endangered tiger.

“Our analysis demonstrates that, overall, tigers face a ubiquitous and mounting threat from road networks across much of their 13-country range,” Carter said in a statement.

Tigers are listed as endangered on the IUCN Red List, with fewer than 4,000 individuals still remaining in the wild. Tiger conservation has been flagged as a global conservation priority, and the international initiative TX2 has set a goal of doubling global tiger numbers between 2010 and 2022 (China’s next “year of the tiger.”)

Years after their construction, even low-traffic logging roads can increase human access to remote areas and contribute to the hunting and poaching of tigers and their prey. Tigers have also been killed by vehicle collisions in India and elsewhere.

In the Kerinci Seblat region of Sumatra, tigers avoid public roads. This behavior is suspected in other areas and represents a significant barrier to tiger movement, with the potential to isolate populations onto tiger “islands.”

The genetic variation that comes from tigers breeding with different populations is important to a resilient, healthy, and increasing tiger population. Maintaining wilderness corridors where tigers can to move freely is of great concern to conservationists.

Areas of habitat that can support at least five adult tigers and where tigers have been spotted in the past 10 years are designated tiger conservation landscapes. The preservation of TCLs is considered crucial for the recovery of the species. Currently, 134,000 km (83,300 mi) of roads traverse the 76 known TCLs.

According to the study, these roads may be decreasing tiger and prey abundance by more than 20%, a finding that the paper calls “a highly troubling warning sign for tiger recovery and ecosystems in Asia.”

The density of roads varies widely among countries and regions in the study. For example, the road density in TCLs in China was nearly eight times greater than in Malaysia. Out of the 10 TCLs found to have the highest road densities, two are considered global priority sites for tigers: the Bukit Tigapuluh landscape in Indonesia and Corbett-Sonanadi in India.

Between 2000 and 2012, Bukit Tigapuluh lost nearly 40 km2 (16 mi2) of forest due to the expansion of oil palm plantations. Over the same time period in that landscape, the number of adult tigers decreased from 36 to 22 individuals.

“Tiger habitats have declined by more than 40% since 2006, underscoring the importance of maintaining roadless areas and resisting road expansion in places where tigers still exist before it is too late,” the study says.

“Given that roads will be a pervasive challenge to tiger recovery in the future, we urge decision-makers to make sustainable road development a top priority,” it adds.

The explosion of new roads is driven in part by global development strategies such as China’s Belt and Road Initiative (BRI), rolled out by Beijing in 2013. According to the researchers, developers of the BRI’s various infrastructure projects could become partners in tiger preservation by making conservation a core value and working to implement a network of well-planned roads placed within wildlife and conservation corridors. The metrics in this study, they say, provide tools to support rapid risk assessment for roads and more sustainable road development.

“This research opens the door to build partnerships at the regional scale to better mitigate existing roads and to develop greener road designs for the next century of infrastructure development,” study co-author Adam Ford, a wildlife ecologist at the University of British Columbia, said in a statement.

Overall, the authors urge decision-makers to consider the placement of roads, not only to protect tigers but to safeguard the richness of biodiversity supported by the forests that surround them.

This article by Liz Kimbrough was first published on Mongabay.com on 21 May 2020. Lead image of a tiger (Panthera tigris) in Malaysia by Rhett A. Butler. Liz Kimbrough is a staff writer for Mongabay. Find her on [email protected]_