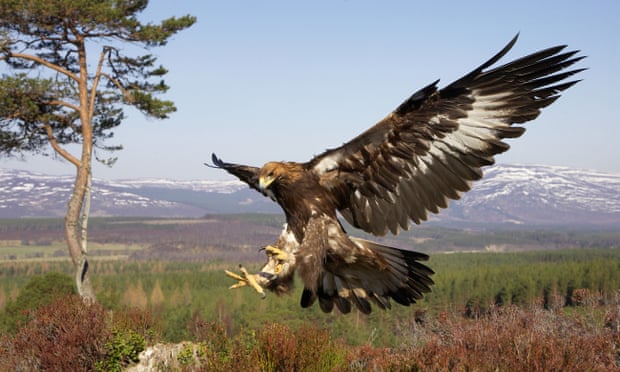 The satellite tag from a golden eagle which vanished in suspicious circumstances on a Scottish grouse moor four years ago has been found in a river, wrapped in lead sheeting.

The tag was recovered earlier this year from the River Braan in Perthshire in what wildlife crime investigators believe is a breakthrough in their attempts to detect and combat bird of prey persecution.

Scores of golden eagles, sea eagles and hen harriers which had been tagged as part of projects to rebuild their populations to natural levels have gone missing in mysterious circumstances across the UK, most frequently on grouse moors.

Their bodies are rarely recovered and tags have suddenly stopped transmitting without warning. In one case, the tag on a golden eagle which disappeared in the Pentlands near Edinburgh stopped transmitting for several days before briefly coming to life again out in the North Sea.

The Royal Society for the Protection of Birds said the latest discovery, in an area which has become infamous for bird of prey persecution, strengthened their demands for grouse moors in Scotland to be regulated.

Scottish ministers are due to set out their plans for licensing grouse moors later this year following recommendations from independent review overseen by Prof Alan Werritty, in a further effort to police the industry.

Duncan Orr-Ewing, RSPB Scotland’s head of species and land management, said he found this incident “doubly distressing” since he had personally fitted the tag recovered from the Braan to the missing eagle in 2014.

“It has long been suspected that tags are routinely destroyed by wildlife criminals in a deliberate attempt to conceal evidence,” he said. “More disappearances of tagged birds this year, as well as shooting and poisoning cases, destroy any pretence the grouse shooting industry is able to self-regulate, even during a national pandemic.

“It is abundantly clear the only way to stop this culturally ingrained and organised criminality against Scotland’s protected raptors is through robust, and immediate, regulation.”

RSPB Scotland said it had recorded 24 persecution incidents around Strathbraan since 2000 involving poisoned red kites, trapped buzzards and other tagged hen harriers, and the disappearance of golden eagles.

Last year the naturalist and television presenter Chris Packham publicised the disappearance of two satellite tagged golden eagles within hours of each other on Auchnafree estate in April 2019. There is no suggestion the estate was involved in either of those incidents.

RSPB Scotland said the tag found in the Braan has been forensically examined by Police Scotland. Ian Thomson, the charity’s chief wildlife crime investigator, said they believed the lead bundle had been thrown off into Rumbling Bridge Falls, a beauty spot near Dunkeld, into the deep gorge below.

They suspect it was then washed downstream when the river was in spate and was spotted by a walker in May when the river’s water levels were unusually low following a long dry spell.

The Scottish Gamekeepers Association said the RSPB had no evidence the person who threw the tag in the river was responsible for killing the eagle, or that lead wrapping had been used in this way before.

“Satellite tags have become heavily weaponised by political campaigners. They elicit high levels of publicity and a person finding one on their land would not want it around, given the scrutiny they would come under,” a spokesman said. “We hope [the police] find the truth of what has happened, for everyone’s sake.”

This article was first published by The Guardian on 25 September 2020. A golden eagle in flight in Scotland. Photograph: Alamy Stock Photo.