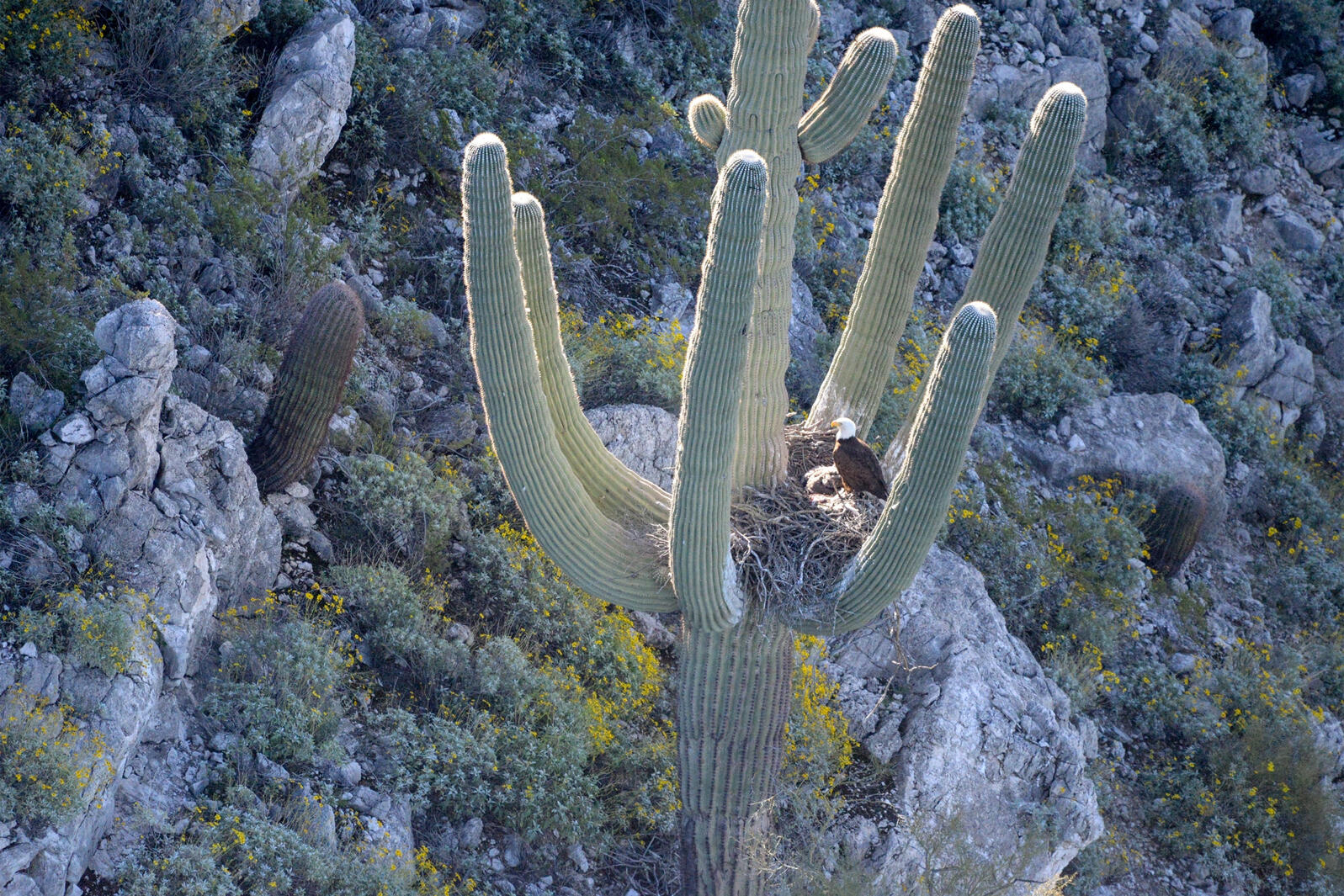 Back in mid-March, Kenneth Jacobson found what he’s been seeking for 18 years. Responding to a tip, Jacobson and his team at the Arizona Game and Fish Department set out for a reservoir in the middle of the state with a healthy skepticism. But even from a distance, what he saw through his binoculars left no doubt that the report was true: There was a Bald Eagle nest, complete with a pair of adults and an eaglet, cradled in the prickly arms of a saguaro cactus.

“It was something I wasn’t sure I was ever going to have a chance to observe,” says Jacobson, the agency’s raptor management coordinator. “We were definitely pretty darn excited about it.”

Rumors of Bald Eagles nesting in saguaros have lingered around Arizona’s conservation community for decades. A trading post owner named Kermit Lee recorded such a sighting in 1937, but it was never substantiated. The game and fish department’s photo, snapped a few days later during a helicopter survey, offers the first proof.

Jacobson was excited not just to confirm rumors he’s been hearing since he joined the agency nearly two decades ago, but because the nest was a potent symbol of a once endangered species now thriving. Bald Eagles numbered fewer than 500 breeding pairs across the lower 48 states in the 1960s, but today that number is estimated at more than 14,000. As a result of this resurgence, suitable trees and cliffs in Arizona are crowded enough with eagles that saguaros—spiked with needles and not as tall as typical nest sites—may be starting to look like prime real estate.

“These birds probably would have nested elsewhere if they had an option,” Jacobson says. “They ended up finding that saguaro, which probably had a Red-tailed Hawk or a Raven’s nest prior to this, and they overtook that nest and decided to make it make their home. So, I really look at that as a bigger indicator of our growing population here in the desert.”

As of 2019, there were 74 Bald Eagle breeding pairs in Arizona, according to Jacobson, up from 52 in 2010 and only 11 in 1978, the year they became protected by the Endangered Species Act. This successful recovery is playing out across the country, and the birds are nesting where biologists thought they’d never see them, such as on utility towers and in cities, according to Brian Millsap, national raptor coordinator for the U.S. Fish and Wildlife Service. Some Bald Eagles aren’t even building elevated nests: In Virginia, two nests were discovered built directly on sandy beaches within three months of one another in 2018 and 2019.

“The bottom line is, if there’s enough food in the area, they will find a way to make a nest,” Millsap says. “That’s not what we expected to see with Bald Eagles 40 years ago.”

Back then, the species was just beginning to recover from the devastation of the pesticide DDT. From the 1940’s until its ban in 1972, DDT was widely used to mitigate mosquito populations, but it also polluted waterways and contaminated the fish that eagles ate. As a result of this widespread poisoning,Bald Eagle eggs often didn’t hatch, and populations cratered. But since the ban, eagles and other birds of prey have made a vigorous rebound.“It’s a success story,” Millsap says. “It just shows that left to their own devices and a healthy environment, Bald Eagles are pretty adaptable.”

Even so, other threats persist. For example, eagles that eat the remains of an animal killed with toxic lead shot often die an excruciating death by paralysis. And though eagles may sometimes nest on electric towers, their vast wingspans—wide enough to span the gap between power lines—puts them at high risk of electrocution. Bald Eagles also sometimes collide with wind turbines, resulting in serious injury or death. The federal government once used the power of the Migratory Bird Treaty Act to threaten companies with fines if they did not make their equipment safer for birds. But this practice ended with the Trump administration, which is working to gut the MBTA and has stopped holding companies accountable for these unintended but predictable and avoidable deaths. However, both intentional and unplanned killing of eagles remains prohibited by the Bald and Golden Eagle Protection Act.

For Arizona eagles, one of the primary threats today is increasing pressure from outdoor recreation, Jacobson says. Because Bald Eagles like to nest as close to a body of water as they can, they sometimes have to compete with boaters, anglers, and other fun-seekers for what little water Arizona has to offer. In some cases, this human encroachment can drive eagles to abandon an active nest.

One way Bald Eagles avoid people is by building nests up to 50 feet in the air. That’s about the maximum height for a saguaro, but typically their limbs are only about 10 feet above ground. Still, these long, thick arms are sturdy enough to support a six-foot-wide eagle nest that can weigh a ton or more, the largest of any North American bird’s nest.This unusual setup means that, unlike most Bald Eagle nests, which look like large, roughly sculpted bowls perched atop tall trees, the saguaro nest is oblong, like a curved tub of twigs wrapped snugly around one side of the trunk.

While Jacobson and his team are still counting eagles for 2020, he expects Arizona’s population to grow by at least three breeding pairs this year. As for the first documented pair of saguaro-nesting eagles, they’re still tending to their chick, which is about six or seven weeks old now and should take its first flight soon. If it likes these digs, perhaps when it’s ready,it’ll build its own nest in a saguaro.

This article was first published by Audubon on 7 May 2020. Lead Image Source : Bald Eagles nesting in a saguaro cactus in Arizona. Photo: Arizona Game and Fish Department