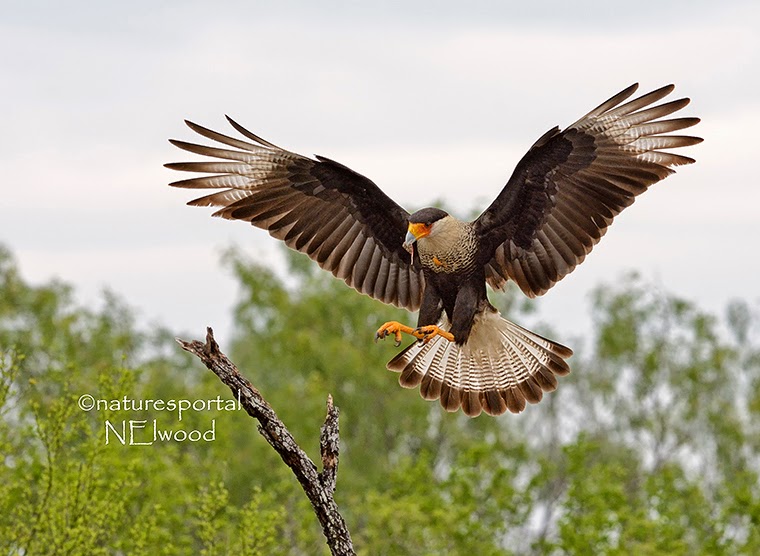 Over the last several years, in a number of photography forums I follow, I kept seeing wonderful images from several of the photography ranches in south Texas. Each year I would say, I need to get down there. Well, last summer I decided to plan the trip. I asked three of my photog friends if they wanted to join me, Lance Hall, Eloy Castroverde and Debby Stubbs. All three thought it was a great idea! It turned out four was a perfect number, as you will see later.

I had to decide what time of year to plan our visit. South Texas, or more specifically the Rio Grande Valley, where most of these ranches are located, is a transition zone where the semi tropical Rio Grande River habitat meets the semi-arid chaparral brush of South Texas. This area is only 15 miles from the Mexican border.

The Valley hosts more than 500 species of birds.Quite a few species of birds stay around all year, like the raptors, with the most common being the Harris Hawks and Crested Caracaras, along withthe North American Cardinals, Green Jays, Great Kiskadee, Golden Fronted Woodpeckers, Greater Roadrunners, doves, Scaled Quail, Black-crested Titmouse, vireo species and an assortment of others.

Then there are the mammals, like the coyotes, bobcats and whitetail deer, and reptiles that regularly inhabit the area. During certain times of the year there are influxes of other species, mostly because of migratory patterns, such as during the spring when you would see many more species of birds, like warblers, and October when there are great numbers of butterflies moving through the area.

Along with the wildlife, many of the cacti, shrubs, trees and other plant species are endemic, or found no where else in the world. I then had to think of the weather. January and February being cooler with the occasional warm day. Then as Spring approaches, the days warm up and the area gets greener with a bit more rain.

The wildflowers and prickly pear cactus start blooming. The permanent resident species like the Great Kiskadee, Green Jay, and Altamira Oriole start breeding. The summer residents start arriving also to breed and nest such as the Painted Buntings. Reptiles and amphibians are seen more and insects increase in number. June the days are quite warm, less cloudy and the summer and resident birds are nesting. I decided on May to catch the migration and to have warmer days, but maybe not too hot. Now to decide which ranches to visit. I had already decided on choosing just two, because that would give us a bit of time on each and not have us feel like we were moving around all the time.

I had heard the most about, so that was going to be one of them. Then the raptor blind at theMartin Refugewas also mentioned quite a lot, so the Martin Refuge was the second ranch for us to visit. The other two I looked at was theDos Venadas RanchandThe Laguna Seca Ranch.

Thirdly, the logistics had to be worked out for the group. The ranches are located near McAllen, Texas and for the most part one has to fly into Dallas or Houston first then take a smaller commuter to McAllen.

I chose Houston for myself, and found it easier for the others to fly into Houston also, for I found a flight from Houston to McAllen that we all could be on, so that we all arrived into McAllen at the same time. I chose a mini van from Hertz to rent, which was perfect. We turned down the back seats and the four of us had plenty of room for our camera equipment, especially our tripods.

My contact with the Santa Clara Ranch had been Hector Astorga. He is the ranch manager and a wonderful photographer in his own right. He would be our guide for the first two days, but the ranch owner Dr. Beto Gutierrez, greeted us on our arrival. He is also a great photographer. Actually, he met us half way to the ranch and we followed him there.

He gave us our introduction, the rules of the ranch and watching out for the snakes, mostly rattlesnakes, but they do on occasion find a coral snake. He is VERY enthusiastic about his ranch and a joy to be around. Since we arrived around 4 pm, we had the opportunity to start shooting right away. In fact, one of the blinds was right outside our front door.

All the other blinds are within just a few minutes drive from the Guesthouse. The blinds and setups are what the ranches are all about. The blinds are permanent, either built above ground or below, situated for either morning or afternoon light. The raptor blinds tend to be above ground to give you a better point of view for the birds flying onto the perches.

The other blinds have small waterholes in front of them, you sit at ground level, with the vegetation being placed so that backgrounds are pleasing for photography. Each of the waterhole blinds have feeders so that the birds would get use to the place and make it part of their pattern for food. Placing natural perches in the right places completed ones setup to get into the blinds and wait for the action.

Bringing some kind of fruit along and placing it near the perches also helped attract birds like the Green Jay and Golden Fronted Woodpecker. For the raptor blinds, meat is brought out to attract mostly the Crested Caracaras and Harris Hawks. You can view better images of the Guesthouse on the Santa Clara Ranch website,www.santaclararanch.com,but to say, it is very comfortable and clean. It has a full kitchen, washer-dryer and satellite wireless internet access, but it is slow.

You can either bring your own food, go grocery shopping when you get into McAllen, or buy the plan that the very nice young Mexican lady, Gabby, cooks for you, which is what we did. The food is terrific! The plan includes all the food and drinks, such as soft drinks and water. I highly recommend this, for your days are long.

We were up at 5 am, out to the blinds at dawn, return at about 11:30 for three or so hours, for lunch and go over our images, and back out to the blinds till about 7:30 pm or so. Most all of the ranches require you to have a guide at least for your first visit. I definitely recommend this!! Hector would get you familiar with the blinds and give you an idea of what to expect, but most of all he would setup those lovely natural perches.

None of us had done that before and we all learned a lot about perch setup and how to attract the different species. Below are just a few pictures of us in and around the blinds. Most of the blinds are suited for four people. The first one is Hector putting together some perches for us.

So with a bit of planning and setup, we waited for the wildlife to show. The two mammals that mostly did come around were the Mexican ground squirrel and the Javelina, or skunk pig, which is really a Peccary. We were never disappointed. Our first few days were a bit more cloudy and rainy than usual, which slows the action some. You see when it does not rain, the birds need the waterholes for drinking water and bathing. When it rains more the water is spread around. We hope for NO rain next year when we return. But, after saying all that, we were thrilled with all the different takers to our waterholes anyway.

On to the Martin Refuge. The best part of the Martin Refuge is their raptor blind. Patty, who is the guide there puts out 50 or so pounds of meat and boy it is like ringing the dinner bell, or should I say breakfast bell, for it is a morning shoot. Within minutes there would be 40 or more birds, mostly Crested Caracaras, but there would also be the vultures and Harris Hawks.

Well, that gives you a good overview of the ranches, now for some information on the camera equipment best suited for your visit. If one has a full frame camera, FX, a 600 mm lens is not too long, but for a crop factor camera body, DX, it is. I feel a 500 mm lens on a DX body is probably pretty close to perfect, or a lens like the Nikon 200-400 lens. I never used my TC on my Nikon 500 mm f/4 lens with my Nikon D7100, which is a DX camera body. On my other body, I had the Nikon 300mm f/4 lens, which I used with and without the Nikon 1.4TC. I used that setup for most of my Martin Refuge Crested Caracara flight images. The Nikon 500 mm f/4 lens I used mostly for the smaller type birds. So one telephoto lens and one shorter type zoom would work a treat. For the most part the weather will be good with plenty of sun, ie light, but of course, for those days that might be cloudy, and/or to be able to have the shutter speeds needed to capture the action, it would be nice to have a camera body that could give good results at the higher iso settings.

Depending on the cost of your airfare, a good figure to count on is around $2500.00 for the week per person, with at least four people in your group. That includes food, daily blind fees, rent a car, lodging, airfare and tips. This is based on double occupancy at the hotels. Four is the magic number for getting discounts from the ranches on guide and blind fees. Just click on the names of the ranches above in the article, and that will take you to their websites for more information.

All four of us had a great deal of fun, learned a lot and had wonderful photo ops! To view more of my images from this trip, and my other work, please visit my websiteNaturesportal. I update the website frequently with new images, so I welcome you to return often.

May you find that perfect light at just the right moment. Nancy Elwood